When I heard Gordon Brown reveal the name of his latest celebrity appointment in the Commons, I was intrigued. Sir Tim Berners-Lee, now charged with helping free up government data for all to use, is not a political animal. Had the founding father of the web realised, 3,000 miles away in Boston where he is based, that he risked becoming embroiled in Westminster politics? After all, it took only a few hours for Sir Alan Sugar to come under attack after his appointment as the government's Competitiveness Czar. 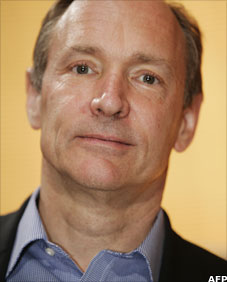 But when I got hold of Sir Tim on the phone yesterday, he was adamant that this was not some party political job, but part of a grand global mission. He pointed me towards a speech he'd made at the TED conference in California about the issue, where he stressed the importance of setting free all sorts of public data, part of his continuing efforts to reframe the web as a tool for interpreting numbers as well as words.

"I had the audience chanting 'raw data now'!" he said. I listened back to that talk and yes, Sir Tim did manage to set a chant echoing through the crowd, though even a roomful of Californians had to be jollied along before playing ball.

The unworldly scientist became a lot more circumspect when I asked him for concrete examples of the kind of data that might be released, sidestepping my question about putting MPs' expenses online.

He was also unwilling to concede that the UK might have a poor record of releasing data so far. He produced an anecdote about the Department of Transport putting out data about bike accidents, which was swiftly transformed by an outsider into a map, and said he saw some enthusiasm within government which he would encourage: "It hasn't been clear how to do it, exactly what format to put it out in, how to index it and keep track of it."

Sir Tim encouraged bloggers to come up with ideas for the kind of data they would like to see made available. He may soon find himself swamped with suggestions, and then he will have to tackle the Whitehall bureaucracy, and some thorny questions about privacy, security and the commercial value of some public data. What, for instance, will be his line to the Ordnance Survey, which has clashed with "free our data" campaigners over its wish to continue making money from its mapping data, rather than simply putting it out there for anyone to exploit?

Now some cynics might suggest that the government needs no lessons in releasing valuable data into the wild, after all those stories of missing laptops, lost discs and USB sticks. But will the cry "raw data now" resound through the civil service, with Sir Tim leading a chanting crowd of bureaucrats through Whitehall? "We'll see - listen carefully!" was the web creator's advice. But I fear he may be in for a bruising few months, as he tries to convince Sir Humphrey et al to let it all hang out.

Still, we've at least taken his message onboard. I've posted our entire phone interview here, apart from the bit where I asked Sir Tim what he had for breakfast to check sound levels. Our little contribution to freeing up public data.