Sometimes a picture really is worth a thousand words. We've all heard about the cyber-battle between the Iranian government and opposition protestors, with a flood of information coming from Twitter, Facebook, YouTube and other social media sources, despite the efforts of the authorities to block web access. But this image - in a blog by the security firm Arbor Networks - really tells the story of the Iranian regime's strategy: 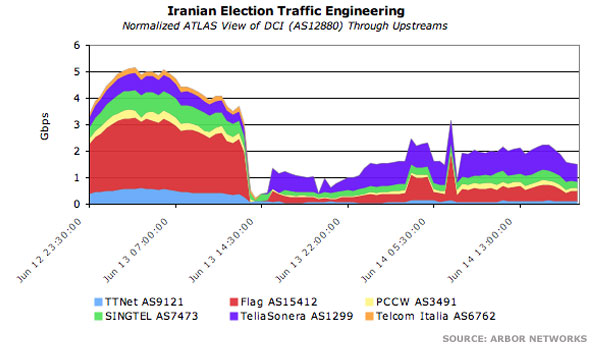 Arbor collects and analyses internet traffic data from 100 ISPs around the world. This graphic shows internet traffic to Iran - and you can see what happened at 1330 GMT on Saturday, the day after the election. The state-owned telecoms company simply pulled the plug, halting all internet communication with the outside world. Then, over the following days, traffic was gradually allowed through again, albeit at a much reduced level.

I spoke to Craig Labovitz of Arbor Networks, in whose blog this graphic appeared, and he had an interesting interpretation of what was going on. Why, for instance, had Iran not simply kept the tap turned off? Craig believes the authorities were buying time to install the filtering tools they needed to have a functioning internet infrastructure, but one over which they had some measure of control. So he reckons they gradually turned the tap back on as they put the filters in.

We talked about two very different countries that have also attempted to control the web; Burma and China.

"Burma in 2008 wasn't very delicate," he explained, referring to the regime's reaction to large-scale unrest. "They simply turned it all off, so there was six weeks without a phone call or an e-mail."

China, by contrast, has a very sophisticated filtering infrastructure, allowing for a completely open interchange of traffic with overseas trading partners, while maintaining strict control over access to forbidden sites and search terms.

Iran seems to be somewhere between the two. As a reasonably sophisticated economy with plenty of trade, it cannot afford simply to cut off links with the outside world, but it hasn't developed the skills of those who built the Great Firewall of China. "Iran is struggling with its strategy," says Craig Labovits,"and the traffic flows show that struggle."

The government is also struggling to compete with an opposition that call on the skills of one of the world's most vibrant blogging communities and plenty of tech-savvy folks.

Once you have begun to infuse your society and your economy with the chaotic and open spirit of the web, it's hard to return to an age where the state can tell you what to think. Hard, but as China shows, not impossible.