Searching for another Google

"I think it's going to be pretty exciting. A new paradigm for using computers and the web." That's what the creator of Wolfram Alpha told the world recently about a new way of extracting information from the web. 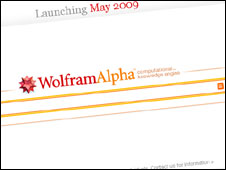 Stephen Wolfram believes his computational knowledge engine will provide a better way of executing a certain type of search query, where you are looking for data, than Google. It will also give you answers directly rather than pointing you to websites where you may find them.

We won't really know how well it works until it goes live later this month - but Technology Review managed to get hold of a login and put it to the test. For the most part, it came up with some quite satisfactory results, particularly for searches involving hard numbers - the term "GM Ford" turned up an array of graphs and tables giving a good statististical picture of the two American car companies.

Inspired by this, and lacking a Wolfram Alpha login, I decided to put some of the other pretenders to Google's crown to the test. Over the last year or so, Cuil, True Knowledge, and Kosmix have all appeared on the scene, offering alternative ways to search - whether by using semantic web techniques or by presenting results in a different way.

Cuil, set up by some ex-Google employees, raised a pile of money and a good deal of publicity last year, promising more detailed results, but has since faded from view.

True Knowledge is a semantic search company started by some very clever folks in Cambridge, England, and is still at the beta stage. And Kosmix is a Silicon Valley start-up, just across town from Google in Mountain View - it promises to give you a rounded view of a subject by assembling data from a variety of searches and sources.

So I tried three of the same searches with which Technology Review tested Wolfram Alpha - plus a take two to give each engine a better chance - and then threw in one of my own.

Here are the results:

Kosmix: linked to Yahoo answers - with a reply to "how many hours from Sydney to New York."

Google: linked to distance calculator sites, which would then provide an answer.

Kosmix: Led to WikiAnswers: with the answer - "the distance between Sydney, Australia and New York, New York is 9935 miles."

Google: Linked first to a site where you can make metric to imperial calculations.

Cuil: Linked first to a news story about a drug seizure.

True Knowledge: "It sounds like 10 pounds kilograms may be an object that I don't know about yet."

Kosmix: Linked to the same conversion site provided by Google - and a lot of conversations about diets.

Take two: What is 10 pounds in kilograms

True Knowledge: This time after scratching its head the semantic engine comes up with the answer too: 4.5359237 kilograms.

Kosmix: Once again, linked to conversion sites and conversations about diets.

Google: First on the list is a link about a writer called GM Ford.

Cuil: comes up with a list of essays comparing GM to Ford.

Kosmix: First links to the same Google results - but later to other sites with comparisons of the companies.

Google: First link is to a news story on "GM and Ford threaten merger".

Cuil: Link to news story "President Bush speaks out on GM and Ford.

Kosmix: A bunch of similar links to Google but mostly irrelevant.

Finally, I posed my own factual question - just the kind that Wolfram Alpha is apparently good at answering - Who was the president of France in 1957? And here were the answers:

Google: Went straight to a Wikipedia page about heads of state, with the answer that it was Rene Coty.

Cuil: Wikipedia: Takes you to another Wikipedia page to find that "Felix Gaillard was elected president of France on November 12, 1957."

True Knowledge: Became very confused and asked me to select from these two questions - what or who is the president of the organisation the French national football team in the year 1957? Or "what or who is the president(head of state) of France..." I chose the latter - and got this: "Sorry, I don't know the answer to that question. It sounds like this is something True Knowledge doesn't know about yet."

Kosmix: links to the same Google search results, but also to other resources about French presidents.

As far as I can see, Rene Coty is the right answer - Felix Gaillard was actually the president of the French assembly. But then again, Wikipedia could be wrong.

To sum up, none of the three Google rivals really merited a detour away from most people's search engine of choice, though Kosmix did perform better than the other two in helping you towards an answer, and True Knowledge has the excuse that it's still in beta. Then again, Google itself didn't really supply speedy access to the kind of data-rich results that Wolfram Alpha promises.

There is a need for an alternative way of turning up all kinds of data - I'm always struggling to find government statistics, corporate results, long lost batting averages - so perhaps that will be on offer soon.

But as Kosmix, True Knowledge and Cuil have shown, it's easy to boast about exciting new technologies that will provide "a new paradigm for using computers and the web". It's rather more difficult to deliver.