Life in the slow lane

Remember when it took five minutes to load a web page - and when every minute on the web meant no incoming phone calls? It's diifficult to recall how we used to live without broadband - until that is, you meet a family like the Shaws. They live just outside the village of Warcup in Cumbria - so far down the line from the nearest BT exchange that the most they can hope for is a dial-up connection. 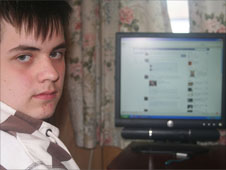 We filmed David Shaw, as he waited for what seemed an age just for Google to load. Then he cut the connection - so that we could go next door and watch his 14-year-old son John try to get onto Facebook. That took about five minutes, and John explained that he hardly bothered to upload photographs, like his friends, because it was just not worth the wait.

Caroline Shaw told us that it was particularly hard, as they'd moved from a home which did have broadband just as it was becoming ever more vital for the children to use the internet in their school work. "They've got to stay at school to do their homework, which means they miss the school bus - so we have to go six miles to pick them up."

From Warcup, we headed to an equally remote home perched on the side of a hill a few miles outside Alston. But Jules Cadie, an artist and web designer, was very happy with his internet connection, from the Cybermoor Community network. In the 300-year-old converted cowshed which is his office, Jules explained to me that he couldn't have lived here if there was no broadband. "I just couldn't compete with people in urban areas without it." 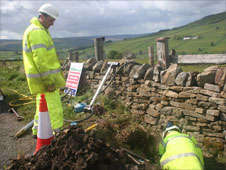 It's thanks to the passion and commitment of people like Daniel Heery, who runs the Cybermoor network, that areas like this are not being left on the wrong side of a digital divide. He took me to see the future, the fibre being laid on rural roads to give Cybermoor much faster connections. It looks a costly business - holes were being dug either side of a farm gate, so that a pipe could be inserted and fibre blown along it. A lot of work, just to bring a few scattered homes within range of a network that will deliver 20Mbps at first, and more later.

You can't see this kind of network ever being a commercial proposition - Cybermoor gets by on a ragbag of contributions from the NHS, the schools budget, and subscription income. Most of the work to bring next generation broadband to Britain will have to be done by the likes of BT and Virgin Media. But this kind of community effort may provide at least part of the answer to filling the holes in their networks.

We've been using the Cybermoor network this morning to send live television pictures from Alston to London and around the world. Meanwhile, a few miles away, the Shaws are just hoping they can soon get any kind of broadband connection - so that John can put a few pictures on Facebook.