How damaging is illegal file-sharing?

It's an emotive and nebulous issue - exactly how damaging is illegal file-sharing to the creative industries? 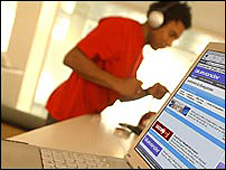 Generally, it is widely accepted that illegal file-sharing causes great damage and means artists from all kinds of backgrounds are not being paid for the professional work they have done.

Specifically, the creative industries have gone to great lengths to spell out the damage done by file-sharing copyright content without permission.

In today's joint statement from the UK creative industries, the government is urged to force internet service providers to ban persistent file-sharers and a very specific charge is laid.

That's almost half of the entire industry which, the statement says, contributes £112.5bn in revenue to the economy, equivalent to 8% of GDP.

The quoted figure comes from a report produced by consultants called Europe Economics, which was commissioned by one of the creative bodies.

However, it's not so clear cut.

The 1.8 million figure refers to all jobs in the creative industries and related "upstream and downstream sectors".

The 800,000 figure relates to jobs specifically in the film, TV, music and software sectors, including upstream and downstream sectors.

But nowhere in the Europe Economics report does it say that "up to 800,000 jobs are at threat from illegal file-sharing". The figure is used to simply state the size of the four sectors.

As one of the people involved in that report said to me: "Someone could reasonably say that all these jobs are under threat from piracy but this is not to be confused with us saying that 800,000 jobs would be lost if piracy were not eliminated."

In fact, the report talks about "employment gains to be had from a reduction in piracy being very large indeed". Specifically, the report says that almost 10,000 new jobs would be created if peer-to-peer piracy was 100% eliminated.

Without question, piracy threatens jobs, but have the creative industries been a bit loose with their maths and language in order to strike an emotive point?

In fact, the report is strewn with strong language:

It is clear that the creative industries have run out of patience with the internet service providers, who have long attempted to avoid being turned into the police force of the net.

The problem for the creative industries is that so many people are blase about the impact of piracy.

For example, when a pre-production version of the Hollywood blockbuster movie Wolverine was leaked on the net an estimated four million people downloaded a copy, and the FBI was called in to investigate.

However, critics pointed out that the film went on to make $160m in five days across more than 100 different countries, including about $85m in North America alone.

Apparently Fox, the studio behind the film, believe the takings would have topped $100m in North America had it not been for the leak.

However, figures like $160m do little to convince sceptics who believe the effect of illegal file-sharing is overstated.

As part of the joint statement by the UK alliance of creatives, John Woodward, chief executive of the UK Film Council, says explicitly that the effect of illegal file-sharing is that "films go unmade, DVD sales deteriorate and jobs are lost in production and distribution of content".

He could not be more clear in assessing the impact of unauthorised peer to peer file sharing. But will anyone listen?