Over the weekend one of the most interesting experiments yet seen in giving web users access to massive computing power has gone live. The official launch of Wolfram Alpha is still scheduled for later on Monday, but thousands of users have already had a chance to try this new way of extracting information from the web.

When I spoke via a video call to Stephen Wolfram, the British physicist behind Wolfram Alpha, on Friday night he was still not entirely confident that his "computational knowledge engine" would fire up. His team at Champaign, Illinois had just used one bunch of super-computers to send vast amounts of data to another, and that test had gone, in his words, "horribly".

But, despite a few hiccups when searchers got "sorry" signs, the system seems to have held up. So what's the verdict? Will it be a Google, changing the way we see the web and the world - or will it be be a Cuil, a much-hyped search engine that sinks without trace after the initial interest? 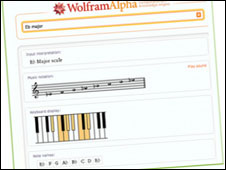 After playing with Wolfram Alpha for a few days, I've found some wonderful things, and vast areas where it is of little or no use. Type in a musical scale, such as Eb major - and it will play back the notes. Look at the weather in London - and it will allow you to compare today with the same day 10 years ago. If you're stuck on a crossword clue and enter a_a_r_m, it will tell you the answer is "anagram". But it is very dominated by US data - so it will tell me the average earnings of waiters in the US, but give me little or nothing about wages in the UK. And even in the United States it has its limitations - ask it for a list of the world's highest buildings and it quickly obliges, but it won't produce a list of the tallest skyscrapers in the US.

As well as trying it out myself, I asked three people who might well have a use for it - a doctor, an economist and an A-Level student - to have a look and give me their first impressions. I warned them that it was not the right place to go to find where the new Star Trek movie was playing (though it does list the cast) or for stories about Jordan and Peter Andre, or any number of other web searches where you're looking for sites, not answers.

The point of it is to answer any question involving data - from historical facts, to scientific knowledge, to share prices - and to present the figures in all kinds of useful ways. But I'm afraid my testers were not terribly impressed:

This tester is a consultant at a major hospital, and he was none too impressed with Wolfram's command of medical data.

"In a nutshell, so far so bad," he told me. "I've asked it various fairly general health questions, including:

- What is the rate of MRSA in UK hospitals?

- What is the survival after stroke in the UK?

- What is the nearest hospital to Oxford?

And I've rephrased these questions several times with no answers. If I get onto my own speciality it is completely clueless. If you don't ask a question but just make a general enquiry about, say, stroke then you can get some headline epidemiological data."

However his 8-year-old daughter fared better. She asked ""How old was Tutenkhamun when he died?" and got the right answer, and, after a bit of tinkering, found out the height of the pyramid of Giza. But, as the doctor pointed out, you could get the same results from Wikipedia.

This economist is always on the lookout for all kinds of data - ranging from governemnt statistics, to company balance sheets, to figures on technology in developing countries. Here's what she said:

"The formats in which it can answer questions are rigid. The source material on which it draws seem limited - I'm very unclear what it's actually searching. Almost everything I tried got the message that it didn't understand my question. Even questions phrased just like some of the examples, with a small change, eg banker instead of forester, got that same answer. There seemed to be almost nothing it could say on my own interests - I couldn't find a way to get it to tell me mobile phone ownership in different countries, which is easily found on the ITU, UNDP and World Bank websites. Oh dear."

This 18 year old is doing A-Levels in mathematics, politics and history. He was more impressed than my other testers - perhaps because he is younger and more open-minded:

"GDP UK Germany" gets good results,"GDP UK Germany 2000-2008" does not. It also seems good at comparing certain types of data for groups of countries, eg "NATO military expenditure" gets you a comparison of how much is spent in each NATO country, and "EU life expectancy" compares life expectancy in all the EU countries.

So not a great set of results overall. But I'm not going to dismiss Wolfram Alpha's chances of success - for three reasons. First of all this, as Stephen Wolfram stressed to me, is a work in progress - at the moment it has got a lot of US data in its super-computers, but not much from anywhere else. Its cry will be "give us your data and we will set it free", so it should be far more useful in a few months' time.

Secondly, where it does work Wolfram is tremendous fun, like a big brother who is just brilliant at sums and wants to show off what he can do. I think a lot of people will visit in the early days just to play.

And finally, it would be nice to have one decent alternative to Google - even one that makes no claims to be better at search. Wolfram Alpha's arrival has already spurred the giant of search to launch a similar product, "Google Squared", which will soon emerge from its labs.

Competition - as Google itself stresses - is a very healthy corrective to complacency, and it's time we had a new kid on the block to show us a different way to use the web.