At the Web 2.0 Expo in San Francisco, internet guru Tim O'Reilly threw out the possibility that perhaps the name should be changed. 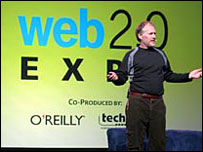 He said he and his friend John Battelle of Federated Media had been playing around with an alternative which was Web 2.0 + World = Web Squared.

When I asked Mr O'Reilly if he loved or hated the name Web 2.0 that he popularised, he let out a big sigh and said "Awww does it have to be one or the other?"

Eventually he admitted "I love it and I hate it. It's a term that has been very effective and very successful in getting across an idea. I spent a long time talking about that idea around the turn of the Millenium, talking about building the internet operating system. It didn't catch on and all of a sudden we had this new term Web 2.0 and everyone got it so how could you not love that?"

In the end he said "I have mixed feelings about it. I am delighted with its effectiveness, it did what I wanted it to do. To catalyse the industry after the dotcom bust that things weren't over and that something mattered about the companies that had survived. They knew something that the others didn't. And I think that continues to be true.

"The companies that are succeeding today understand better than others what it means to be building software in the age of the internet."

As to really getting behind Web Squared, Mr O'Reilly said "It was just one of these idle thoughts where you go dub dub dub and then you go one more w and that gets you to web squared, right?"

My unscientific research on the expo floor found more people hating than loving the Web 2.0 title.

Paul Thompson said "Keep it. It hasn't been around for very long and you need a few years to build an identity. If you replace it with Web Squared, people will go what happened to Web 2.0?"

Mark Kirthcart thought "it's sounding a little dated and overused."

Sindee Thomson's view was "Web 3.0 will be here soon." For her, Web Squared was a total no no. "I hate it. It reminds me of mathematics and I was never good at my sums. I think it should be Web Cubed."

Brooklynn Morris was a big fan. "I think Web 2.0 is a great title but I think people don't like titles in general especially when it gets in the way of free concepts."

Kevin Marshall said he thought people were "tired of Web 2.0 because of all the hype around it. Web Squared however, I don't think is any better."

Alistair Mitchell suggested that instead of Web Squared it should be "Web Shared because the web today is all about sharing - sharing the content of your life through things like Flickr, Facebook, where you live, where you are and how you work."

Taomas Rio said "Web 2.0 is too techy. Sure the core of people who come here know what it means but the internet is always evolving so why do you need versions or numbers to categorise it?"

As for Web Squared, Taomas was aghast. "Oh no that's web weird!"