How many friends do you need?

Well, we all know that what we need is at least one really really good friend. But in the world of social networking, the average is 120. That's according stats from Facebook - which, by the way, has just topped 200m. Now that is a lot of friends to poke and throw sheep at, whatever way you slice and dice it.

It's clearly a watershed moment for the company which is just over five years old. I have no idea if the two-hundred-millionth active user was given a bottle of champagne or free lunch with founder Mark Zuckerberg, but I feel they should get something, even if it is a free t-shirt! 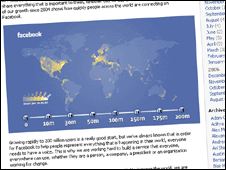 One thing Mr Zuckerberg did to mark this momentous happening was write a blog post. He also announced a new space on Facebook where people can write and share their stories about how Facebook has helped them to give back to their communities, to effect change or to connect with a distant relative. In other words, Facebook community, this is your opportunity to write about how wonderful Facebook is.

They have put a cool timeline on the blog page that shows how fast the community has grown - but really, it underlines how much of the world still has to be conquered by the service. World domination is still some way away, it seems.

But before anyone goes totally negative on the whole online friends routine, a study by IBM and MIT [460Kb PDF] has discovered that there is money to be made from those buddies.

The IBM collaboration with MIT's Sloan School of Management tracked the electronic communications of over 7,000 volunteers for three years. The aim of the work was to put a dollar amount on the effect of those electronic and virtual relationships.

Researchers found that having strong connections to managers (yes, sucking up to the boss) can boost the bottom line. On average, it adds up to $548 (£365) in extra revenue a month.

This conclusion is based on data and mathematical formulas that analysed e-mail traffic, address books and buddy lists of 2,600 IBM consultants over the course of a year.

No word on how those involved in the failed Sun takeover talks rated!