Digital Britain - who foots the bill?

Everybody who was anybody in Britain's digital industries was there. The bosses of BT, Virgin Media and Universal Music mingled with the likes of Stephen Fry and Feargal Sharkey. Oh, and the prime minister and three senior ministers turned up too. But did the Digital Britain summit at the British Library on Friday take us anywhere further down the road to, well, Digital Britain? 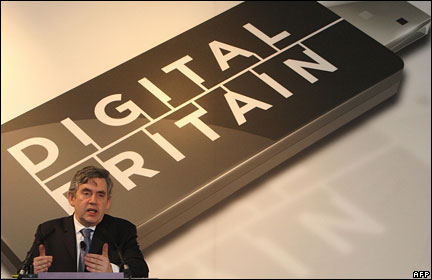 I was at the event for a couple of hours, before rushing way to cover a much bigger story, the end of the Pirate Bay trial. But nothing I saw at the event - or read about afterwards - convinced me that we were much further advanced in deciding what must be the biggest issue at the heart of Lord Carter's forthcoming report on our digital future. Namely, who's going to pay to build a next-generation broadband network which reaches every corner of Britain?

Sure, there were more than enough rousing calls for a new age of digital wonders, where every home would be able to host live video conferences with the doctor, where every child would be given the skills to build Britain's rival to Twitter or YouTube and make us a world-leading knowledge economy.

Before I'd even arrived at the British Library, one technology company was offering me the chance to speak to one of its executives at the summit about the exciting possibilities that lay ahead if Britain invested in the high speed internet.

"With a high bandwidth connection just imagine what UK citizens could do...", the e-mail began. I replied, asking whether this IT services business was a)planning to invest in the building of this new Jerusalem, b)hoping that state aid would do the job? The company beat a hasty retreat, making it plain that this was one area it would rather not discuss.

The conference started with the prime minister comparing the digital revolution we are now experiencing with the industrial revolution, and insisting "we must invest or we will fall behind." That investment, he went on to explain, would not only be in skills and education but in the technical infrastructure required to make Britain ready for the next stage in the development of the global economy. But I wasn't clear who "we" meant - the market or the government?

After I'd left, Lord Mandelson took to the stage and appeared to go further than Gordon Brown in hinting at the possibility of state intervention. He mused on whether we could be comfortable with a situation where only half of British homes would get super-fast broadband in the next few years, and, when asked about the possibility of public investment, said that was a "possibility". Mind you, from the accounts I've read, he made it clear that the governemnt would much prefer to leave it to the market.

That, of course, means BT and Virgin Media. While each of those firms has been talking up their plans to roll out fibre networks to parts of the UK over the next couple of years, neither is at all keen to move beyond the territory they've sketched out for those networks. That means half the country will be left out of this brave new digital future - unless new money can be found.

While BT welcomed Ofcom's move a few weeks back to encourage fast broadband investment with light-touch regulation, the company seems, if anything, to have become even more cautious about promising more investment. It believes it has gone as far as it can to bet billions (ok, about £1bn) on rolling out fibre, without antagonising its nervous shareholders.

Its message at the summit, as voiced by its chief executive Ian Livingston, was that the economic case for fibre to the home was "not proven", and that it wasn't clear that consumers really wanted high speeds.

Away from the summit, BT has been spinning vigorously about broadband. Its message? Britain hasn't fallen behind its rivals - indeed in terms of take-up, availability, and price, we compare well with most major economies.

At this point mischievous journalists will mention the two words bound to make a BT executive's blood boil - South Korea. The nation that has provided 100Mps broadband to much of its population with little fuss is often cited in articles decrying Britain's poor performance in the speed tables.

But BT will then point out that in Korea, and in just about every other place that is investing heavily in fibre-to-the-home, government money is playing a big part.

BT - or Virgin for that matter - isn't saying it out loud but the message to the government is clear. If you really want us to build Digital Britain, you're going to have to pay for it.