Second Life is planning to clean up its act and the question is: can the 3D virtual world survive without its, ahem, hardcore audience?

It was once the most talked-about web development on the planet, but it has gone very quiet of late. 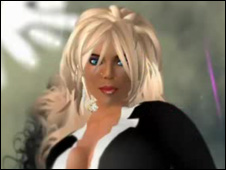 After the gold rush of companies seeking to establish virtual premises in the 3D world, many have now pulled out or left their digital empires to mothball.

The BBC was not immune to its charms: Radio 1 established an island for listening to the station and live events and a virtual Jeremy Paxman once hosted Newsnight from the 3D space.

Reuters used to have a Second Life correspondent, but he has now been sent on more tangible assignments.

"The very things that most appeal to Second Life's hardcore enthusiasts are either boring or creepy for most people: spending hundreds of hours of effort to make insignificant amounts of money selling virtual clothes, experimenting with changing your gender or species, getting into random conversations with strangers from around the world, or having pseudo-nonymous sex (and let's not kid ourselves, sex is a huge draw into Second Life)."

Second Life has always been an "anything goes" environment. But the tawdry Sin City is about to get cleaned up.

Linden Lab, the firm behind Second Life, is about to enter the world of "regulation".

Those who want to engage in the digital blending of pornographic pixels will now have to do so on a standalone "continent" built purely for such pursuits.

Users can still engage in whatever flights of fancy they have on "private land" in Second Life, but if you're up to anything naughty, you will be asked to move to the special continent.

Second Life is walking a fine line between making the virtual world more appealing to the mainstream and not alienating its core audience.

The virtual world isn't aiming to become Club Penguin, but it knows it has to do more to broaden its appeal.

And despite the fact that Second Life has dropped off the hype-meter, the company insists it is still thriving.

Last month unique "residents" with repeat logins users hit 732,526, up on the previous month and the world held a peak of about 88,000 users concurrently.

The figures may be pointing up but they remain exceedingly modest next to the successes of Facebook, with 200m users, and Twitter, with 10m users, both of which have emerged in the time it has taken Second Life to go from hot to not.