Readers of my Twitter feed will probably know that I've just bought some networked-attached storage to give myself 1.5 terabytes of back-up capacity. 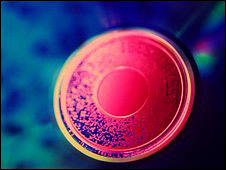 It turns out that I might be able to replace the small, but slightly noisy, hard drive in my living room with just three optical discs - thanks to a breakthrough in microholographic disc technology.

General Electric has announced a new optical disc that can store 500GB of data, equivalent to 100 DVDs. It's still in the labs, and there's a long way to go before it ever reaches the consumer market place, but I had to suppress a slight groan at even the thought of a new physical format on our shelves.

After enduring a painful "next generation DVD" battle between HD-DVD and Blu-ray that led to blood on the carpet, many consumers have been put off replacing their existing DVD collections.

The Blu-ray brigade point to the fact that Blu-ray disc sales have doubled in the last year but the adoption of the technology is not at the same speed as DVD.

There is a feeling from some quarters that Blu-ray is an interim technology that is merely bridging the physical format and the digital delivery of content over the net.

And there's no evidence that GE's disc is being pitched as a Blu-ray rival. A disc that can hold 500GB of data, 10 times the amount on today's Blu-ray discs, is not going to find itself in HMV anytime soon.

A single GE disc could be used to package up a library of high definition movies but is there pent-up consumer demand for such an offering? I'm not so sure.

3D television and formats such as Super Hi Vision are a long way from being adopted in the mainstream and although they could be the reason we need GE's discs, many obstacles have to be overcome before this is the case.

This is why General Electric is pitching its new disc to the archive industry. Physical discs offer an alternative to hard drives and tape, and even 500GB is peanuts in the world of scientific research where petabytesof storage is needed.