It's not an obvious leap to make - the co-founder of Apple and someone who helped revolutionise the world of personal computers doing the cha cha cha on national television.

Well that is just what Steve Wozniack did last night here in the States on Dancing with the Stars. Incongrous and so wrong on so many levels. But at the same time a lot of fun. 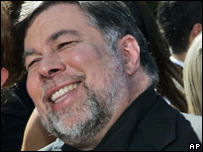 I have interviewed Woz on a number of ocassions and he is always a joy to speak to because he is forthright, frank, fun and full of energy. And you know what, he simply likes to live life large. I sure can't imagine Steve Jobs doing this kind of thing.

Woz applied the same gusto and sense of fun so often on display to his cha cha cha with fellow dancer Karina Smirnoff, five times US latin champion.

Even though Karina said during rehearsal that "when Steve took his first step, I thought Oh! Oh! we've got a lotta work to do," he approached it like a true engineer would.

"All the numbers and the beats are very mathematical," he told Karina as the sweat was pouring off him. He sat for a while in his enormous beige t-shirt, short shorts, black socks and black trainers with his eyes closed visualising the dance.

"I know his mind can remember the steps. I hope his body can pull it off," Karina intoned into the camera.

Woz declared before he took to the stage "I am going to prove nerds can dance." It was a big promise to make and according to the judges one that he didn't quite pull off.

Len Goodman said "It held my attention throughout. I was fascinated." So far so good? Not for long.

"I enjoyed it but it was a disaster."

Bruno Tonioli said "I didn't know if it was hilarious or delirious. It was like watching a Tellytubby go mad."

Bruno got well booed for that barb.

The host, smooth as silk Tom Bergeron quipped "Let's see Bruno get an appointment at the genius bar anytime soon" for his comments.

Carrie Ann Inaba was much more generous spirited and told Woz "You are what this competition is all about. You are going out on a limb and you went for it."

Woz acknowledged that it was the most fun he had ever had, so much fun in fact that "they are testing me for drugs tomorrow!"

At the end of the night, the judges had the final say and voted Woz the bottom of the heap with just 13 out of 30 points for his performance on the dance floor.

Woz's song this week was "You Ain't Seen Nothin Yet." Next week will be his chance to prove that title has real meaning.

Just one piece of advice from moi. Leave the feather boa at home!