Who owns the train times - or the news?

Planning for a train journey, I turned to my phone and an incredibly useful application called MyRail Lite. It is "location-aware" so knows my local station - and can tell me when the next train leaves and whether it is on time. But as I was scrolling through the timetable, I came across a message. "We regret that this service will be discontinued from 31st March 2009 as our license to distribute real-time train information from National Rail Enquiries for live departure boards is not being renewed." 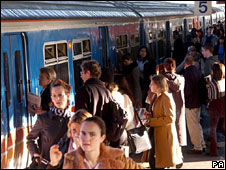 What a pity, I thought, and then I remembered that a few days ago I'd received a press release promoting another train time iPhone application from - guess who - National Rail Enquiries. At the time I'd asked the press officer how the app compared to MyRail Lite - and been promised that it was far superior.

So last night I installed it and tried it out - and it was indeed very good, enabling you not just to check departure times but to plan a whole journey. But there's one catch - it costs £4.99, whereas MyRail Lite was free.

I got back in touch with National Rail Enquiries and was informed that there'd never been a licensing agreement and it "had not been possible to reach a mutually agreeable solution."

So it seems that NRE has moved to protect its intellectual property in the form of real-time train information, in order to "monetise" that data.

From a business point of view, it makes perfect sense - but surely it is entirely against the spirit of openness, the idea that "information is free"? What's more, the move harms rail passengers who now have to pay more for information which will help them choose the train over the car.

But just as I'd come to the conclusion that data really should be free, and that any attempt to lock it up inside your own walled garden and make money from it was both foolish and misguided, I read something which made me wonder.

In a long but fascinating dissection of the death spiral of American newspapers, James DeLong ends up nudging towards an interesting conclusion - that journalists have sealed their own death warrant by their insistence that "information should be free."

The result, he argues, is that newspaper content, once fiercely guarded and the source of huge profits, is a pond that anyone - from a thousand bloggers to Google News - can dip into and profit from. But that means there's a lot less revenue to support the organisations that still create most of the online news content.

The most frightening figures in the article are those relating to the Washington Post's advertising revenues - $573m for the newspaper with around three quarters of a million subscribers, just $103m for the website which has eight million unique visitors a month. So if all those analogue readers migrate online who'll pay for the journalism?

Some journalists are already reaching the conclusion that information should not be free. Here's the editor of the New York Times:"Really good information, often extracted from reluctant sources, truth-tested, organized, and explained - that stuff wants to be paid for."

We journalists mocked the music industry for its doomed attempt to protect its content from the file-sharers - and now organisations like National Rail Enquiries can expect brickbats for putting their data behind bars. But maybe they've looked at what's happening to newspapers which decided to let their content roam free - and learned some lessons.

The company behind MyRail Lite, Kizoom, has been in touch to clarify matters. It says it DID have a long-running licensing arrangement to use National Rail Enquiries data in applications for various mobile phones. But the two sides seem to have fallen out over the issue of an application for the iPhone - Kizoom believed their existing agreement covered that phone, NRE did not.