Phorm - one year on

The controversial targeted advertising firm Phorm is to hold a second open Town Hall meeting, a year after it first met with the public to discuss plans to roll the technology out to Internet Service Providers.

Phorm works by doing deals with ISPs which allow it to scan and categorise certain web pages a user visits and then to allocate targeted adverts to users when they visit websites that have signed up to the technology and which align with those categories.
So far BT has committed to rolling out the technology, known as Webwise to consumers.

Phorm is controversial because some feel that monitoring users' web surfing habits is an invasion of privacy, while others feel that the way Phorm works breaks the law.

The company itself believes that targeted advertising can benefit the web industry as a whole and wrestle some power back from ad firms like Google and put it into the hands of smaller enterprises. For ISPS, Phorm believes it represents a potentially powerful new revenue stream.

The firm says the new meeting "follows on from last year where we engaged with the concerned, the curious and the enthusiasts".

I was at that meeting and while there were plenty of the first and some of the second, I certainly don't recall any of the third group.

The second meeting will take place at the London School of Economics on 7 April at 6.30pm.

So what has happened to Phorm over the last 12 months?

After controversy erupted over BT's trialling of the technology without informing customers, quite a lot has happened:

Phorm hits the headlines. And two privacy professionals give their first assessment of the technology.

BT is accused of conducting illegal trials of Phorm on its users.

The Information Commissioner in the UK says Phorm must be 'opt in'.

Phorm bosses meet with the public to explain the technology and foster discussion.

BT says it will start further trials of Phorm 'very soon'. But nothing happens for a further five months.

Dr Richard Clayton, a respected computer expert, says BT should be prosecuted for carrying out its first trials of Phorm without user consent.

Users hand a dossier of evidence to City of London police saying Phorm carried out 'illegal' trials with BT.

The EU steps into the Phorm debate and asks the UK government to clarify if the technology breaches European data laws. 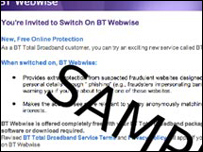 BT finally starts a small trial of Phorm. This time it informs customers and asks them to take part in the trial.

The UK government says Phorm can be rolled out in the UK, following questions from the EU. But any future deployments of the system must be done with consent and made easy for people to opt out.

The City of London police close the file on Phorm, saying no criminal offence had been committed.

Four of the directors stepped down from the firm, following what the Guardian called a disagreement over the direction of the business.

The UK chief executive of Phorm also steps down, reports The Guardian.