N is for networking

When did you first try to set up a wi-fi network? As far as I can remember, my first was back in 2003, and involved about a fortnight of grovelling on the floor under the computer, reading three sets of instructions seemingly written in Japanese, hours on the phone to helplines, and the odd bit of swearing and weeping.

The whole process has got a lot more "plug-and-play" since then - after all it's a mass market product now in millions of homes. But trying to set up a new network this week to send a fast internet connection around my home proved that wi-fi can still be pretty challenging. It's also clear that getting fast connections into homes is one thing - sending the signal wirelessly around them is another matter. 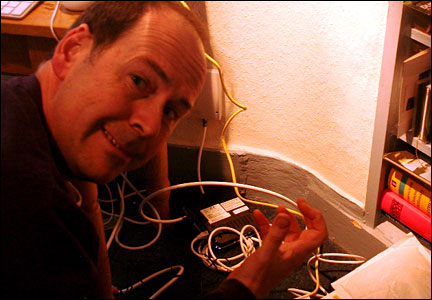 This was my first experience of using the router which is supposed to deliver far faster speeds - one on the 802.11n standard. Yes, I know - why should we as consumers need to know about this gobbledegook - and I'm sure I wasn't really aware that previous routers were 802.11b, g, q, a or z. But I've found that this time there's stuff you need to know.

So here's how it went. First I put the set-up disc in the computer which took me to a PDF file with some pretty simple set-up instructions. When it said "now switch off your computer" I did so - and realised that I no longer had the instructions. Duuuuuuuh, as my youngest son is prone to say. Turn on again, print out the PDF - not all 60 pages, just the relevant ones, and start again.

Having wired everything correctly, I was then directed to a website which would allow me to configure the router, by entering "admin" and "password". It took me instead to the router maker's homepage. I kept on re-entering the web address - and kept coming back to the same place, rather than the secret door into the router. Time to call on expert advice - my teenage son, who doubles as our director of IT when he can be called away from World of Warcraft duties.

After a quick search he found that entering the same string of numbers which we'd used to access other routers allowed us to open this one too. Then it was easy - upgrade to the latest firmware, choose our wireless security option - WEP -and, hey presto, we were up and running.

The only trouble was that over the next 24 hours it became clear that the network was limping rather than running. For one thing my son's computer kept dropping off it. For another, it was only delivering speeds of as low as 5Mbps - on our new fast cable connection of "up to 50Mbps" which was achieving 48Mbps on a wired computer.

I mentioned this to a colleague at work who is far more learned than me about networking. "802.11n isn't actually an agreed standard yet," he opined wisely. "what's more in a busy street like yours you'll get all sorts of other networks crowding out your signal."

I also sought out, as I'm prone to do these days, some advice from the Twitter community. People were very helpful - but not all that clear. Here's one example: "If you have huge packetloss (try sudo ping -c1000 -f 209.85.171.100 in Terminal) try reinstalling latest combo update on all Macs."

Hmmm - maybe Wikipedia could help? Well the entry on the 802.11 standard has this message right at the top:"This article may be confusing or unclear to readers". Which isn't exactly encouraging.

So then I got in touch with a real expert - a man who works for one of the big router firms. He immediately diagnosed my problem - I'd put the wrong kind of security on. It turns out that WEP just doesn't work with "n" routers - or rather it does but it throttles them back to "g" speeds. It only works at full speed if you have no encryption or use one of the WPA options.

So why on earth does the router company allow you to choose WEP? He explained that they'd originally shipped the shiny new routers without it but there had been a consumer backlash. My router man also confirmed that the 802.11n standard hasn't been finalised yet, so there's the possibility that some bits of kit won't work with others, even if theoretically they are both using 802.11n.

I went home that evening and followed my expert's instructions, and immediately achieved some pretty impressive speeds - though so far we haven't got above 30Mbps on the wireless network.

My expert had said you could get wireless of up to 47Mbps on a 50Mbps line - but warned that all sorts of factors could bring that down. Other people's networks, the microwave and cordless phone in our house, the design of the computers we use, mobiles using bluetooth in the home could all cut those speeds.

But most members of the household seem pretty happy with what we've achieved. Except for my younger son. He has our oldest computer - handed down the family. It's seven years old - and doesn't talk WPA which means he can't enter the password to join the network. We''ll need to find a way sort him out.

All in all, setting up a new network has been an awful lot less of a headache than it was back in 2003. But there's still a language to be learned, from 802.11n to WPA2PSK with AES encryption. And if you don't speak fluent wireless, you may need to find a decent interpreter.