Is Android (Google's open operating system for mobile phones) finally stirring from its torpor and becoming a force to challenge Apple's App Store in the world of mobile applications?

I ask after spending a morning with a group of keen Android developers, who were enthusiastic about the potential of Google's open source operating system. No wonder, really, as they'd been invited along by T-Mobile, which has been heavily promoting the only Android phone on sale so far, the G1.

But they had some impressive stuff to show off. Most eye-catching was Wikitude, described by its creators as the first "augmented-reality" application. 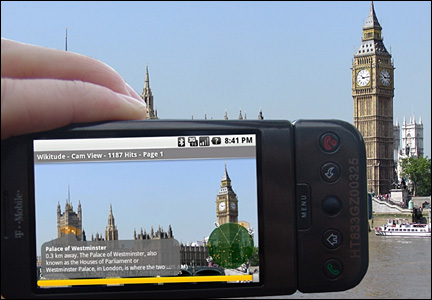 It uses an Android phone's GPS and compass capabilities to map information about places of interest. The clever thing, though, is that as well as seeing the information plotted on a map you can turn on the phone's camera, point it at a building and see information on the screen.

Mobilizy, the firm behind Wikitude, is now launching another app called Zenith, which takes the same idea into the skies. You point your camera at the night sky - and get a star map.

Two other applications were more mundane. A company called Skycoders has developed Cabs4Me - again, it's a location-based service, enabling you to find a local cab service in a hurry. It has apparently been downloaded 56,000 times.

Then there is the Telegraph's mobile news service, developed by Mike Jennings - poached from Google where he was an Android developer. It apparently has 36,000 active Android users, checking out much of the paper's content - and it has also put the same app on the iPhone.

What all the developers had in common was enthusiasm about the process of producing Android applications in comparison with working on something for Apple's App Store. "Apple has an approval process which can take days or weeks - with Android you decide when it goes live," explained one. "It took us four times as long to get the app onto iTunes as to get it onto Android," said another.

With Microsoft and Nokia also now opening application stores, Apple may find it needs to streamline its process to keep developers on board. I notice that Microsoft is boasting that its Windows Marketplace will offer a "simple and transparent publishing policy."

But what the developers at the T-Mobile forum also shared, as far as I could see, was uncertainty about whether the whole game was worth the candle - in other words, is there any money in it?

From today, Android's Market will feature paid apps - so alongside the free stuff will be games like Guitar Hero. But these will generally be the work of big developers, who may in any case see this sort of work as a marketing tool rather than a profit centre.

When I asked about revenue, the Telegraph team told me that their app is sponsored - and leads users to videos with pre-roll ads. But sponsorship can come and go, and I wonder how much revenue those adverts generate?

Still, for a business like the Telegraph, it can't be too expensive to reprocess all that content and make it available to a growing crowd of mobile readers.

The Cabs4me firm hoped to make revenue from mini-cab firms, and the Wikitude people were looking at the possibility of selling location-based advertising - which conjures up the terrifying prospect of burger chain ads posted on a virtual Taj Mahal. But everyone at the forum admitted these were early days - and that many small developers may struggle to get their applications heard above all the noise. "It's like the early days of the dot com boom all over again." said one. "Everyone's trying stuff out, but nobody is quite sure what will work."

But the clear winners from the battle between Android and Apple, Nokia and Windows, are the consumers. If, that is, you have a hunger to do anything with your phone but make a simple call.