Members of the police, it seems, are bracing themselves for trouble on the streets of London as the G20 summit gets underway. But there's also a battle going on in cyberspace, as the various protest movements use all the latest tools to organise.

We've become accustomed to seeing Facebook, Twitter and other social networks used to bring together protesters or to run campaigns. What's different this time is that it's not just opponents and critics of the global get-together who are using these tools - it's also the organisers themselves. 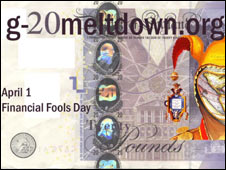 Let's have a look across the online G20 landscape.

First of all, you've got the usual websites where protesters gather - not very different from what was around in 2003 when major protests against the Iraq war took place in cities around the world.

So, for instance, there's "G20 meltdown", which says it has these three goals:

1. Participate in a carnival party at the Bank of England
2. Support all events demonstrating against the G20 during the meltdown period (from March 28th onwards)
3. Overthrow Capitalism

There is no timetable, I notice, for that last goal. But protesters are also using new tools that weren't widely available in 2003. All sorts of Facebook groups are organising all sorts of events around the G20 summit.

And "G20 meltdown" has one of the biggest with more than 3,000 members. I see that there's a lively discussion on the topic: "Is G20 Meltdown an MI5-backed infowar, propaganda exercise?"

Then, of course there is Twitter - but while this may well be a good way of exchanging information, I doubt that it's a major force in organising demonstrations - one social media expert told me he reckoned Twitter was "an older person's tool" and that young anarchists were unlikely to be tweeting their exploits. 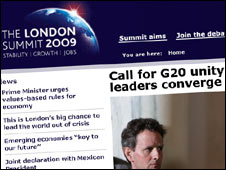 On the other side of the fence, it's not hard to find official G20 material online - websites, Twitter feeds and so on.

But more interestingly, there's what you might call a "third way" - a swathe of social media activity which is sponsored, or encouraged by the government.

One of these projects is Yoosk London Summit, run by a business which is attempting to provide a debating forum where the public can engage directly with politicians. Yoosk says this particular venture allows anyone to put questions direct to "an impressive line-up of ministers, business and civil society leaders" about the financial crisis. I notice that today, for instance, "SadBog74" is asking Gordon Brown:"Should G20 nations agree to tax bailed-out-bank bonuses at a minimum rate of 90%, as Barack Obama has done so in the USA?"

Yoosk is an independent business, but this project has government money behind it - so how independent can it be? Tim Hood of Yoosk told me, "We're walking a fine line - we have a level of access that we wouldn't get otherwise. It's not as independent as we'd like - but we're getting there." 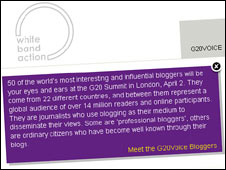 Then there is G20 Voice - a group of 50 bloggers who are going to be given access to the summit, in an exercise organised by Oxfam but sponsored by the Foreign Office. They range from Daniel Kaufman, a writer on corruption and financial crises to Rui Chenggang, a blogger and financial news presenter for Chinese TV.

Also among them is Lloyd Davis, a British social media consultant who told me that 25 years ago he'd stood on picket lines during the miners' strike but was now a little old for that kind of thing. "They might say we've all been 'captured'," he told me, "but I'm interested in the issues here, and how we can organise our way through this recession or depression."

Mr Davis and his fellow bloggers have had security clearance so that they can get into the Excel centre and attend the press conferences, which means there could be an alternative view of events from that provided by the mainstream media.

So new social media tools can provide ways for demonstrators to wreak havoc on the streets, though they are very public places if you're planning anything you don't want the police to read about. They can be used by governments to parrot an official line about the G20. Or they can provide a forum for a genuinely open-minded debate about a crisis which affects us all. Then again, the Twittering, blogging and Facebooking about the G20 could turn out to be a minority interest. Maybe we're about to find out just how interested young social networkers are in world events rather than in celebrity gossip?