I had one of the biggest shocks of my journalistic career the other evening - though I speak as someone who has led an unusually sheltered life - and my experience raises a few issues about the trust we put in new web services. I'd been touring various BBC studios, talking about a breaking story, the YouTube row with songwriters which led to the blocking of music videos. In each studio, I took a picture on my phone - and then uploaded it to Twitter using a service called Twitpic. An activity that some of you, no doubt, will regard as fatuous - but part of the way I keep a record of my daily activities and share it with anyone who is interested. 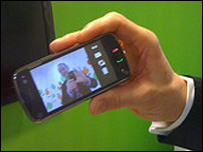 All went well, until I uploaded a third picture - of the BBC news channel set - and returned to my desk to find various startled messages on Twitter:

"Think that might be a wrong picture Rory and you might want to look at it ASAP." "Are you really sure about that photo?" "Please tell me twitpic has confused your photo with someone else's?" "You might want to check that last link!"

So I did check that last link - and instead of an inoffensive picture of a BBC studio, it was a shot of a young woman wearing nothing but a smile, in a pose that can only be described as extremely post-watershed. I let out a startled yelp, and went into a flurry of action, deleting the "Tweet", and the offending "Twitpic", and changing my passwords, assuming I'd been hacked. Then I set off to find out what had happened.

A number of other people contacted me to say they too had uploaded pictures to Twitpic, only to find that someone's else's shot had appeared - though they had all been innocuous images. Twitpic, it turns out, is nothing to do with Twitter - it's a third party application which has latched onto the expanding population of Twitterers, giving them a quick and easy way to link to photos. It's integrated into various "tweeting" applications, like Tweetie and Twhirl, which makes it all the more popular. It was used to upload the most famous Twitter picture to date, the shot taken by Janis Krums of the plane which landed on the Hudson.

I managed to track down the man behind Twitpic, Noah Everett. He was, as you'd expect, extremely apologetic. He explained that I hadn't, as I'd feared, been hacked - but instead had been the victim of what he described as "a random bug" that sometimes gets a user's photo mixed up with someone else's.

I hope the bugs get sorted out. I had been planning to use it to raise money in the Red Nose Day appeal, taking shaky phone pictures of various BBC personalities, and getting Twitter and Facebook users to guess who they are. In the circumstances I'm using another application - mobypicture - to upload the pictures. (Head here if you're interested).

But yet again I'm putting my trust in a social web application, which is obviously a risky thing to do. I've long realised that social networking is a public activity and you can't put anything online - thoughts, images, jokes - without assuming that you are giving that data to the entire world. What I hadn't realised is that you could be at risk of showing someone else's data, however offensive, on the web in your name. And that is really very frightening.