It's a collection of ramshackle buildings on the fringes of Milton Keynes. 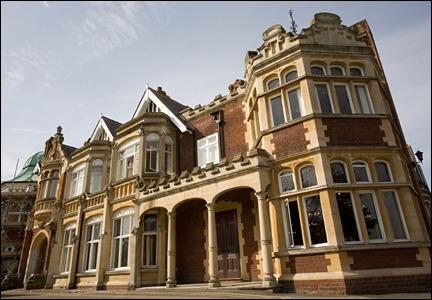 A bizarre choice then, you might think, for an architectural award. But Bletchley Park has just won the top prize in the Building With Pride awards, beating rivals such as Cardiff's Millennium Stadium and Liverpool's Cavern club in a poll to choose the building which inspires most pride in the British public.

That the World War II coding centre - and now National Museum of Computing - has been recognised in this way is largely due to the work of a few individuals who've been determined that this historic site should have a secure future.

I visited Bletchley Park last July to meet Dr Sue Black, a computer scientist who'd organised a letter to the Times appealing for a concerted effort to save the site.

It was clear then that a lot needed doing. The main building, an undistinguished 19th Century house from which the wartime decoding operation was run, needed a new roof.

But what was really shocking was the state of the huts - prefab buildings where Alan Turing and thousands of others had gone about the business of decoding the messages produced by Germany's Enigma machine.

Many looked ready for nothing better than demolition, with tarpaulin covering the roof and holes in the walls. Even one hut that had been restored looked a makeshift effort, not really conveying its wartime character.

What's more, the exhibition dedicated to the history of British computing - including the Colossus machine which cracked wartime codes at the Park - was not displayed in any coherent fashion, despite the heroic efforts of the volunteers who've assembled the collection.

But Dr Black - and the small team that runs the Bletchley Park Trust - have made progress with their fundraising efforts. So far just under a million pounds has been donated to restoration work by the likes of Microsoft, IBM, and the Heritage Lottery Fund.

A vital component in this campaign has been what you might call the propaganda war - although one which has employed the most modern of weapons. Dr Black has assembled a significant crowd of supporters for Bletchley Park - geeks, history buffs, technologically literate celebrities - using all the modern social media tools.

There's a "Save Bletchley Park Group" on Facebook, a group on the photo-sharing site Flickr where images of the site can be viewed, and there's a lot of activity on Twitter.

Dr Black told me she realised in December that a critical mass of people she knew in the computing world were now on the micro-blogging site, and decided to set up an account (@bletchleypark) for Bletchley Park. It's acquired over 1,000 followers, but its influence has spread far wider, informing a tech-savvy crowd about developments at the site and used as a way of organising visits.

45% of the votes in the Building With Prides awards went to Bletchley Park, and it seems likely that many of them were mobilised by the various social media sites.

"We wouldn't have won without social media," Dr Black told me, "this kind of campaign wouldn't have been possible a few years back. It's power to the people."

Mind you, there's a long way to go before Bletchley Park looks like a fitting monument to the brilliant codebreakers who helped shorten the war - and to computing pioneers like Alan Turing and Tommy Flowers, the Post Office engineer who built Colossus. Let's see whether social media can continue to prove a potent weapon in the fundraising battle.