Without too much fanfare, Apple took the wraps off its next generation software for the iPhone and the iPod Touch at a fairly low key event at their campus in Cupertino. 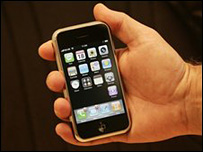 There was none of the mad jostling that has gone on at some of the company's other product launches. Though I do hate it when they make everyone wait outside like second class citizens. Still at least it was sunny and they did provide muffins and coffee.

At the end of the day there was no need to stop the presses and hold the front page with this announcement. I am not alone in thinking that. Ernest Doku of mobile phone news site Omio.com, e-mailed to say: "After the excitement surrounding Apple's last software update that brought us the groundbreaking App Store, this latest version seems to have a little less to set pulses racing."

Indeed it seemed to some degree like Apple playing catch up with the rest of the smartphone brigade by giving a lot of iPhone users functionality that is pretty standard on a lot of other smartphones.

The big headline is the ability to copy, cut and paste from one application to another. The other is multimedia messaging.

One missing piece from the puzzle for many users is the ability to record video or play video made using Adobe's Flash software.

At a question and answer session after the invitation only launch, Apple execs gave a "no comment" when pushed on the issue.

They were equally mum when I asked a question about a new iPhone. "Nothing to announce today", Apple's Phil Shiller told me.

I know I should know better because Apple never pre-announces anything, but I felt it would have been remiss to simply not ask the question. Afterwards Gartner Analyst Van Baker, who follows Apple, told me he reckons it will happen and it will happen in the summer around the same time as the software release.

Note of course that is when co-founder and CEO Steve Jobs is supposed to be back at the helm. And note also that since he went on sick leave, announcements out of Apple have so far been damp squibs. So they are going to need something that will wow when he gets back on deck. 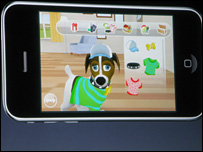 A host of developers also attended the launch to see what was in the SDK or software developers kit for them to help build their applications. In all Apple said there were some 1000 api's or software hooks for developers to use.

A few of the developers demonstrated some apps that they had produced after just two weeks of using the SDK Beta. ESPN showed how it can update games with scores while LifeScan, a Johnson & Johnson company, demonstrated how someone with diabetes could regulate their condition and track peaks and troughs.

Game developer Ngmoco demonstrated a virtual pet game where you can buy virtual clothes or toys and then veered to the other end of the spectrum with a first person shooter game where users could pay small sums of money to upgrade their gun. From hanging with fido to fragging it was one heck of a leap! 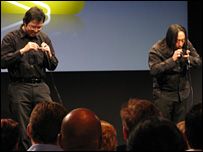 The most entertaining demo was from the Smule guys who create sonic media and are behind the phenomenally successful Ocarina app that has turned the iPhone into a musical instrument by blowing into it.

The app that company co-founder Ge Wang developed for this gig was called Leaf Trombone which allows users to play the iPhone like a trombone.

Their rendition of Phantom of the Opera rocked the event and got the loudest cheer of the day.