Who profits from the App Store?

You will struggle to find a happy shopkeeper right now - but I've just met one. His name is Eric, and he has good reason to be contented. After all his store only opened in July last year, but has already sold 500 million products, and its deal with its suppliers means it gets 30% of the revenues. And as the store is in cyberspace, it is cheap to run and most of that revenue is profit. 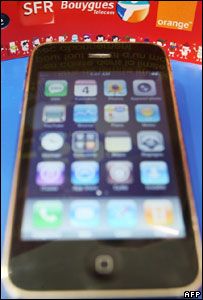 I'm talking, of course, about Apple's App Store, which has created a whole new industry of mobile application developers. Yes, I know that Nokia and Windows Mobile users have been able to install applications on their phones for years - but the figures show that it was only the arrival of the iPhone which sparked real interest from both users and developers.

The company called me in to the Apple Store on London's Regent Street to meet Eric Jue. His title is "Senior Product Manager for iPhone", which I think means he minds the Apps Store. Eric was keen to give me a sneak preview of some upcoming applications - all of them games, which apparently account for 25% of downloads.

They included Sway, where you climb across a wall until you fall off, and Zen Bound, where you wrap a rope around a 3D object and paint it different colours. "Why?, I asked. "It's a game - it's a zen thing", came the answer. I was more impressed by something called WordFu, a sort of cross between Boggle and Scrabble, in which you race to make words in two minutes, and can play against a friend if you both happen to have an iPhone on the same wireless network.

All of these were relatively simple affairs made by tiny firms, with a handful of staff. But businesses like the games giant EA are also weighing in. Eric Jue showed me a version of their Tiger Woods golf game, due for release in the summer, with some pretty stunning graphics, evidence that the iPhone is being taken seriously as a gaming platform.

I'd come armed with questions about some notable gaps on the shelves of the apps store from users and developers who wondered whether Apple was deliberately blocking admission to some ideas. For instance, where are the sat-nav applications? Google maps doesn't really quite do the trick if you're driving because there is no voice guide. Will Apple allow music services like Spotify to offer mobile applications, risking iTunes sales? And does Apple make it easier for big developers to get their applications through than the smaller developers?

Eric Jue insisted that any idea was welcome, as long as it met Apple's terms and conditions - only something that might seriously offend would be refused. He said there was a level playing field. "Everybody has the same tools - whether you're a bedroom developer or you're EA Sports with a big budget. The public decides whether it's a success or not."

Among the biggest successes are the Ocarina, which turns the iPhone into a musical instrument and has reaped big profits for its creators, who include a Stanford professor of computing and music. But is it really that easy to make your fortune from mobile phone apps? Not according to two British developers.

Jeremy Rayner, who describes himself as a "hobby" developer says he developed his game "Rabbit Run" on his train commute from Hastings to his day job in London. It sells for £1.19 and after Apple's 30% and the tax is deducted, he ends up with 50p. "Initially, I got about 30 downloads a day, but that's now down to about one a day." So an income of 50p a day? "Yes, but that's 50p I didn't have before." Mr Rayner says he's glad to get on the same platform as giant firms, but does wonder a little how he might promote his game a bit better.

Riccardo Ettore has been developing Apple software for more than 20 years, but again he does it in his spare time from his job as an IT administrator. He has a range of iPhone apps, including Big Ben, which puts the famous clock face onto the phone, and - perhaps more useful - Tapit4me, a so-called snippet expander which allows you to tap out whole words from abbreviations, making it quicker to use the iPhone's touch keyboard.

Mr Ettore says it's getting harder, not easier to make money, as the field gets more crowded." In the early days people just downloaded anything. My first application, a xylophone, got 200 downloads on its first day." He thought Big Ben was going to be a big money spinner when a free version was downloaded 3000 times in a couple of days, but when he started charging 59p, just 20 people a day thought it worth paying. "What seems to be happening is that most people expect all applications to be free," he laments. "You hear all these incredible stories like Ocarina, but it's like buying a lottery ticket."

Still, both of these hobbyists seem happy enough to keep on churning out applications for the iPhone and the iPod Touch for little or no return. And Apple is even happier - all those tiny amounts earned by the "long tail" of App Store developers add up to a big fat profit for the shopkeeper. And even if users gradually decide that most apps are not worth paying for, Apple will have succeeded in getting a lot of software which makes the iPhone more useable for nothing.