It was the weekend which shook Google to its very foundations... possibly. All around the world, users of the search engine which prides itself - and has built a multi-billion dollar business - on providing the best, most useful answers to every query were greeted with a message warning that "this site may harm your computer".

The same text was pasted next to every search result - for everything from Aardvarks to Zoroastrianism. In effect, Google was warning users that the entire internet was sick and shouldn't be touched with an electronic bargepole.

Panic spread as the global web community told each other about this apparent breakdown. Google eventually fixed the problem, explaining that an update of a list of malicious sites somehow ended up including every web address, instead of one specific URL. But what a textbook example of a corporate disaster allowed to rage out of control...

...hold on a minute. The entire incident lasted just 55 minutes. And if you were on the West Coast of the USA, where Google is based, you are unlikely to have been affected, because it started at 0630 your time on a Saturday morning and was over by 0725. So why all the hoo-hah?

Well, news spread like wildfire around the blogosphere - or more accurately the Twitterverse - as everyone seemed determined to pass on their panic, along with rumours that Google's Gmail was also misfiring. So far. more people knew about the "may harm" incident than were affected by it. I got off a plane on my way home from a holiday on Saturday afternoon, asked online whether I'd missed any big tech stories, and was bombarded with messages about the Google crash. 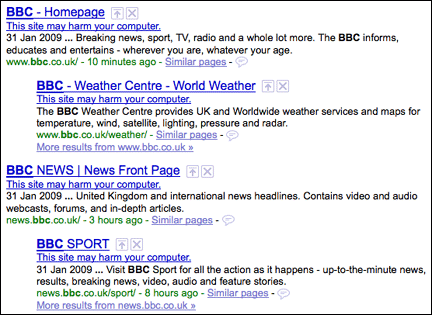 So what's the verdict on the importance of this incident? One blogger decided that Google could have done better, awarding the company just 5 out of 10 for its handling of the crisis and accusing it of failing to respond as quickly as it could have done. That seems a bit harsh - it sounds like someone was hauled out of bed in Mountain View at 0645 on a Saturday to tinker with the engine, and got it sorted straight away. But it does go to show how rapidly you need to react to a crisis in a world where your mistakes will be the subject of web chatter within minutes of them happening.

Two Twitterers gave rather different views of Google's 55 minute crisis. One said, perhaps not completely seriously: "kennedy, lady di crash, and now #googmayharm! Everyone will remember what they were doing". Another put it like this: "small message under Google search results brings Twitterverse to a halt. Real world curiously unaffected!"

And the other thing to remember is that while the web's reactions may be fast, and its gaze intense, its attention span is very short. In Britain at least, a temporary problem with a search engine has been eclipsed by the arrival of snow. #uksnow is the tag attracting thousands of comments on Twitter - and I suspect it may take a little longer than 55 minutes to sort that out.