At an internal BBC event yesterday, I described Twitter to a group of colleagues, most of whom had never used the micro-blogging service.

"It's like a very fast, but not entirely reliable news agency," I said, and got a cheap laugh by naming a genuine news agency which has that reputation.

Now, twice within 24 hours, I have received first news of a breaking story by looking at my Twitter feed.

On Wednesday evening, I was travelling home from a night out, glanced at my phone and saw one of the people I follow on Twitter talking about Apple's new statement on Steve Jobs' health. That meant I could get straight to work on filing a radio piece.

Then on Thursday evening at around 2145, I was staring at my laptop, idly checked Twitter, and saw someone saying that it was amazing that a plane could land on water and that everyone would survive. So on went the BBC News Channel, and the most extraordinary news pictures for some time appeared. 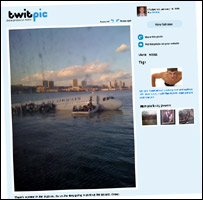 But one of the very first pictures to be posted from the scene was obtained by a Twitterer from Sarasota, Florida, Janis Krums, who was on a ferry and took a snap on his phone and immediately posted it on Twitpic. Twitpic is a site which is helping in the transformation of Twitter from a pared-down messaging tool into a multimedia service - and a great platform for citizen journalism.

Last time I looked, more than 97,000 people had viewed the picture. He has since been interviewed by a number of media organisations and says in a recent tweet: "[t]he last few hours have been intense." I bet.

We've talked a few times here about events which have tested Twitter's worth as a news source - from the China earthquake to the attacks in Mumbai.

We've also discussed the tricky issue of what checks journalists should make when scooping up what's on Twitter for broadcast - we know, for instance, that some of what came out of Mumbai turned out to be inaccurate (see "Twitter - the Mumbai myths").

But Mr Krums' picture, taken on the rather low-quality camera on an iPhone, already looks to be a classic of the new age of citizen journalism. So maybe my cheap crack about its reliability as a news agency was a little wide of the mark.

Update: Janis Krums, the Twitterer who took a picture of the Airbus from a ferry which came to its aid, explains how it went round the world.