America's first CTO to be named

Following the American election, a favourite parlour games in the living rooms of Silicon Valley has been asking: Just who will land the job of America's first ever chief technology officer? Well, the wait will soon be over because an announcement is expected on Wednesday.

There has been some concern that the person who will take up the post has not yet been named, given the president-elect's penchant for using technology to get his message out on the campaign trail and now as he waits in the wings at 1600 Pennsylvania Avenue.

With just over two weeks to go, the role of CTO is one of the few senior appointments that remains unfilled. Many expected an announcement around the same time Mr Obama named his science and technology team just before Christmas. But it was not to be.

Whoever lands the job, they will have no shortage of help in working out what they should tackle first. As I have written previously, there is a specific website that has been set up where ordinary citizens can vote on the CTO's main priorities. And of course there is the transition team's own site which has been encouraging people to do the same.

On obamacto.uservoice.com, the number one priority with nearly 13,000 votes is "ensuring the interent is widely accessible and network neutral." That is followed by nearly 10,000 people voting for the future CTO to "ensure privacy and repeal the patriot act."

While the appointee will undoubtedly have to be someone who can straddle over the worlds of Washington's political power brokering and Silicon Valley's high geekdom, a range of names has already been doing the rounds. They include Google's Eric Schmidt, who helped advise Mr Obama and has himself said several times that he wasn't interested in the job and Vint Cerf, the so-called "father of the internet" (who's also a Google exec and Chief Internet Evangelist").

Other names that have been talked up include Amazon CEO Jeff Bezos and even, believe it or not, Apple boss Steve Jobs who will not be appearing at this year's Macworld in his usual capacity as chief Mac cheerleader, be that for health reasons or not. 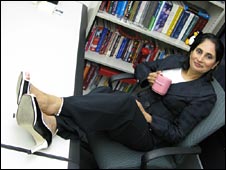 Amid all the names, I note few women mentioned. And that's despite some strong contenders like Anne Mulcahy, the boss at Xerox, her CTO Sophie Vandebroek, Cisco's CTO Padma Warrior, Meg Whitman formerly of eBay, Anne Livermore of HP or Safra Catz who is president and former CFO at Oracle.

There, now: that wasn't so hard.

All of course is set to be revealed this Wednesday. Place your bets now, please.