A year ago, Apple's shares stood somewhere around $155 when I posted here about a hugely impressive set of results. The shares fell back because Wall Street was disappointed with Apple's forecast. They then climbed to around $200, before plunging downhill with the rest of the market. 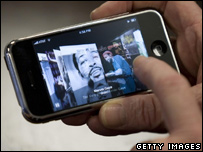 Now Apple has produced another sparkling set of figures for the last three months - perhaps even more impressive given that they come in the depths of our harsh economic winter. Record quarterly revenues - more than $10bn for the first time - record profits of $1.6bn, and the company is now sitting on an enormous cash pile of $28bn. So surely the shares will now leap ahead from their current level of $83? Well, maybe. Let's first take a closer look at the results.

Where is the cash coming from? 22.7m iPods, 4.7m iPhones, more than 2.5m Macintosh computers - and a profit margin of nearly 35%, with Apple benefiting from falling component prices.

On the analysts' conference call, Chief Financial Officer Peter Oppenheimer and Tim Cook, the stand-in CEO in the absence of Steve Jobs, basked in the admiration of Wall Street, with some analysts prefacing their questions with congratulations.

So is Apple that rare corporate creature - the recession-proof business? Well, lurking in the results there were just a few warning lights.:

iPods: Despite having more than 70% of the MP3 player market, the iPod just keeps on growing. But has it finally peaked? Apple revealed that all the growth in the last quarter came outside the US (where sales actually fell) and, but for an amazing last week when frenzied present-buyers apparently stormed the stores in search of Christmas presents, there would have been an overall fall. Endless innovation - colour, video, touchscreen - has so far kept new buyers coming. It is difficult to see what the next trick will be.

Mac: While the halo effect of the iPod and iPhone continues to drive customers to the Mac, there was a major shift away from desktops to portable computers. iMac sales, compared with very good figures the previous year when a new version came out, actually fell while the Macbook range saw sales rise 34% after it was refreshed in the autumn. Tim Cook said that this was all part of an industry-wide shift away from the desktop and that Apple had outperformed the market. But the growing phenomenon in portable computing is netbooks - cheap pared-down machines. Apple has stayed out of this market so far and Tim Cook was dismissive of netbooks - "less powerful than customers want, cramped keyboards, small displays... we don't think people are going to be pleased with those type of products". They are of course unlikely to provide the kind of margin Apple has achieved with its bigger shinier laptops. But perhaps they're just what a customer wants in a recession?

iPhone: The "Jesus" phone has comfortably passed Steve Jobs' prediction of 10m sales by the end of 2008 - but were quarterly sales of 4.3m just a tad disappointing? Wall Street had expected more. But Peter Oppenheimer and Tim Cook were more bullish about this product than any other during the call. "We continue to believe we are years ahead of the competition," said Oppenheim. But there is of course plenty of smartphone competition out there now . Earlier this month, Palm unveiled its Pre, the closest imitation so far of the multi-touch iPhone. Without naming Palm, Tim Cook issused a clear threat to rivals who might copy Apple too closely: "We like competition as long as they don't rip off our IP (intellectual property). We will not stand for having our IP ripped off and we'll use whatever weapons we have at our disposal."

Of course, the big unanswered - if not unasked - question during the conference call was when and whether Steve Jobs will return to the helm. But Tim Cook - an obscure figure until now to most outsiders - did himself no harm with a calm, if combative performance as he outlined Apple's performance. But the company admits that the road ahead through a global recession lacks "visibility", so these will be testing months.

A constant stream of innovative new products has kept customers coming to the Apple stores, even in a holiday season which was bleak for many retailers. Now, with nothing very new in those stores and consumers hunkering down for hard times, will this be the quarter where the iMachine finally comes to a halt?