E-tailing - has the revolution arrived?

Two sets of figures out today confirmed what I'd expected - that amidst all the economic gloom, online retailing continued to boom at Christmas.

One set of statistics came from Nielsen Online [pdf], which puts web traffic under the microscope. Its report says that traffic to the top ten UK retail websites was up by 37% in the last quarter of 2008 compared to the previous year. 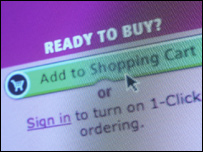 No surprise that Amazon is at the top of the list with a monthly audience of 15.6 million. But that was a rise of just 18% on the previous year, whereas the figures for some traditional retailers were far more spectacular. Argos saw its audience rise by 32%, Marks and Spencer had a 46% rise and Littlewoods' audience was up 66%.

Earlier the British Retail Consortium had issued its survey for December, and it was packed with gloom and doom. "Worst December in Survey's History," was the headline on the press release, and it's obvious that the high street had a pretty miserable Christmas. But right at the end was this line: "Non-food non-store sales in December were 30.0% higher than a year ago." That means online retailing to you and me, and it's a far better performance than was predicted, even by the online retailing industry.

In the past the BRC, which in the main speaks for the big high street retailers, has been sceptical about the share of total retail sales enjoyed by the online sector. It puts it at under 4%, while the IMRG, which describes itself as "the voice of e-tail", claims it is much higher at around 15%. Whatever the true figure, two things are clear - online spending is growing rapidly, while high street spending is shrinking.

Back in the late 90s the dotcom evangelists told us that online start-ups would crush the dinosaurs of retailing and leave the shopping malls and high streets deserted. That didn't happen - but a decade later the online retail revolution is finally happening. And funnily enough, the dinosaurs are now leading the charge.