Throughout my years as a journalist I have had the pleasure of interviewing thousands of people from all walks of life. I have also been lucky enough to quiz a couple of personal heroes including Audrey Hepburn, Gordon Moore, Steve Wozniak and Spinal Tap.

Interesting bedfellows I am sure you will agree.

The experience of meeting these people, shaking their hands and having the privilege of asking them any question under the sun has been awesome.

This week however reached a new zenith when I went to Stanford University for the 40th anniversary of the world debut of personal computing and the computer mouse. 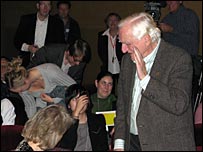 I met the man famed for presenting "the mother of all demos" Doug Engelbart, who was being honoured. Despite his health, he graciously spoke to everyone lining up to meet him, pump his fist and get their photo taken with him. And all of this done with an incredible modesty and slight incredulity no doubt.

Just as in 1968, here in 2008 there was a standing ovation for him. While 40 years ago he probably felt relieved that everything had gone better than according to plan, this time round emotion got the better and he had to wipe away a tear or two.

There was also Bill English who invented the computer mouse along with Doug and, while holding the very first one he built, simply described it as "just a tool." His wife Roberta accompanied him to what seemed almost like a reunion of the group that helped create the first collaborative computing system.

Jeff Rulifson who is now the director of VLSI Research Group at Sun Microsystems told me about long working hours, dinner at one in the morning in a Menlo Park burger and beer joint and hanging out at his Stanford University digs drinking sherry with Doug. He also recalled a rather heated argument his wife had with Doug over the idea of using a computer to write a shopping list. "Why would you want to do that? It's useless" Jeff quoted her as having said. 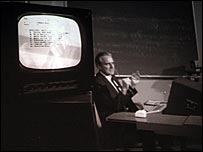 As Doug was demonstrating the technology in San Francisco, 30 miles away in Menlo Park was one of his software engineers Bill Paxton. Today he remembered how Doug was "a voice crying in the wilderness."

The man largely credited with helping that "voice" get heard was Bob Taylor who basically greenlighted the money to pay for this project and many others.

Journalist John Markoff of the New York Times called him the "true father of the internet."

The ideas of Mr Taylor along with J. C. R. Licklidder, or Lick as he was known, led to the creation of ARPANET and later the modern internet.

At the 40th celebration he told story after story about the good old days and of the one when a "suit" came from Washington to ask the pertinent question "I want to talk about Doug - Why are you funding this guy?"

And the rest they say is history. Albeit it a history that has not been fully realised as many of these men maintain, including Doug's daughter Christina who runs the Engelbart Institute and told me "There has been such an explosion of technology but it really hasn't reached the level of potential Dad envisioned actually in the early 1960s."

What struck me throughout the day of celebrations, the archive on display and hearing these men talk about that seminal time was the cameraderie and collegiate spirit that prevailed. Everyone wanted to share. Profit was not the motivation. There was a greater goal to be achieved.

Even today as this event looked back 40 years and acknowledged that what these men set out to achieve was extraordinary in terms of technological advances, they all remain so humble and unassuming.

I am not saying that some of that spirit doesn't exist today but there is the sense that back then it was oh so very different. Call it an age of innocence but I think the futurist Paul Saffo nailed it when he said the time back then was "a blank sheet of paper" and anything was possible.

And it was all done wearing shirts and ties. Yes even in 1968, there was not a pair of chinos or a polo shirt to be found. Ah very different days indeed.