Five grand for Sock And Awe 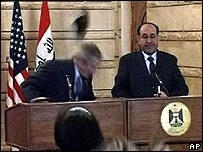 Who says entrepreneurship is dead in the UK? The week began with an Iraqi journalist throwing a pair of shoes at President George Bush. On Monday, a few people traded ideas on Twitter for what might be a good tabloid headline for the story - and came up with "Sock and Awe".

By Tuesday one of those Twitterers - website designer Alex Tew, whose earlier ideas included the Million Dollar homepage - had come up with a game and posted it on a website, sockandawe.com. Now he has sold the site on eBay for £5,215.

The buyer is a company called Fubra, and at first sight they are either mugs or just looking for a bit of cheap publicity. This site may have already attracted more than a million unique visitors but surely it has a very limited shelf life and will soon fade away, along with all those Prescott punching games and other brief internet crazes.

But Fubra have been quick to put adverts on the site, and are claiming they will have made their money back by tomorrow night. A spokeswoman told me that the firm had plans to develop sockandawe and pointed out that another Fubra property, housepricecrash.co.uk, had continued to prosper - despite predictions that it would founder now that house prices have in fact crashed. (It must be a testament to Fubra's marketing skills that it manages to sell housing finance ads on a site devoted to the folly of investing in property).

So maybe it is Alex Tew who is the mug for selling out so quickly? But then the whole incident restores my faith in the speed and ingenuity of the British tech scene, and British journalists. After all, Silicon Valley didn't come up with a viral Bush shoe game, and the headline in the New York Times was Iraqi Journalist Hurls Shoes at Bush and Denounces Him on TV as a 'Dog'. Not quite "Sock and Awe".