Do you ever long for those good old days? The days when AOL and Time Warner merged? When Wikipedia was founded? When George Bush was sworn in as president and Tony Blair bagged the UK general election? 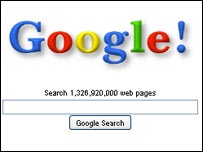 When Gladiator won best picture Oscar? When Bayern Munchen clinched the UEFA Champions League? When Beijing succeeded in its bid to host the 2008 Olympics? When Apple released the iPod and Microsoft released Windows XP? And when Google was awarded a patent, number 6,285,999, for the PageRank search algorithm used in their search engine?

The year was 2001... and if there is anything you miss about those times then Google wants to help you relive the experience.

Here's your ticket to the past.