Have you ever worried about whether the videos you upload onto YouTube or other video-sharing sites could be infringing someone's copyright? No? Me neither. After all, the pictures I use are mine, shot by me. Plus, there's the fact that my video has been dropped into a vast pool of content and surely nobody is going to comb through all of that? 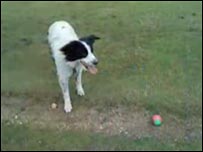 But then this week I got an e-mail with the heading "Copyrighted Content Identified in one of your YouTube videos". It was from YouTube's Content Identification Programme and it referred to one of my videos called "A Dog and a Kite". As this featured footage of my family and our dog playing around with a kite in the park I couldn't quite work out what the issue was. Then I remembered that I had cut the pictures to that classic Cat Stevens track "I Love My Dog".

YouTube's assiduous team pointed out that that this was copyrighted material belonging to UMG - Universal Music. It turns out that the site allows what it describes as "partners" to review YouTube videos for content to which they own the rights.

Luckily, the message continued, Universal Music "does not object to this content appearing on YouTube at this time." However, Universal will now receive statistics revealing how many people have viewed my video - 59 last time I looked. But, wait for it, they will also have the right to place adverts on my video's page. And when I went to the page there was a box with adverts for, believe it or not, kites.

Which raises a few questions. I'd already paid for that Cat Stevens track - yes I'm proud of my taste in 70s classics - so how come Universal is on my case at all? And my video was public - would they have spotted my use of their content if I'd set it to "private"? Oh, and do I get a share of that advertising revenue?

A phone-call to YouTube's owners Google provided some answers. I was fortunate, the PR man suggested, that under new arrangements content owners like Universal were more likely to choose to put adverts next to my video rather than demand it was taken down. Making it private rather than public would make no difference. And no, I won't get a share of the advertising revenue - it will be split between Universal and YouTube. Which seems a little unfair, considering that it's my excellent pictures, rather than the Cat Stevens soundtrack, which are at the creative heart of my video.

It all brings home just what a public place YouTube is. When Viacom won a court order giving it access to YouTube's logs of every video every user had ever watched, it was suggested there was no real danger of them sniffing through our individual videos and viewing habits. But it now appears that every content owner is crawling over every single YouTube video and examining it for the merest hint of copyright infringement.

Still, at least, I'm now in a business relationship with Cat Stevens. But what's worrying me now is another guilty secret in my YouTube closet. It's a video of the kids playing with a toy rocket launcher, and it's called "Rocket Men." i'm just hoping that Elton John doesn't listen to the soundtrack.