Which way to the mobile web?

How do you get the mobile internet? Via wi-fi - or perhaps through one of those dongles that you plug into a laptop? 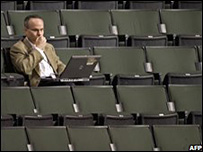 Wi-fi and 3G have been battling it out for the last few years to be the technology that keeps you connected on the move. But today 3G gets a big boost, with the unveiling of an alliance between leading computer manufacturers and mobile operators to promote devices with mobile broadband built in.

It must be around five years ago that laptops started featuring wireless cards as standard. That seemed to be a signal that wi-fi was going to be the winner. Soon wi-fi hotspots were spreading beyond coffee-shops to cover airports, stations and other public places. Then whole cities began to unveil ambitious plans to provide coverage for everyone - often for nothing.

It suddenly seemed that all of those mobile operators who had spent fortunes buying 3G licences and rolling out networks had wasted their money. Not only did wi-fi provide a faster and better connection, but it offered users the ability to make Voip calls, which could really make a mess of the mobile industry's business model.

But somehow it hasn't quite worked out like that. The municipal wi-fi movement appears to have stalled, and getting online - in a city park, in a hotel or in an airport - can still be a frustrating affair. You type in your credit card details, then a long password - only to find that you're crawling, rather than speeding, over the web.

Meanwhile, the mobile firms have invested to speed up their 3G networks. Then last year, perhaps emboldened by wi-fi's slow progress, they started an aggressive marketing campaign for their mobile broadband products. At a surprising speed, the dongles have taken off - a recent survey from Point Topic claimed that they were already a more popular way of getting online than wi-fi.

Now it looks as though "embedded" 3G will soon become standard for laptops - and a range of other web-connected devices. So does that mean game, set and match to 3G? Not according to Steve Andrews, who, as BT's MD for Mobility and Convergence, is something of an evangelist for wi-fi. Mr Andrews told me that BT's wi-fi business was growing at 100% per annum, and that we were looking at a future where customers used both technologies in tandem.

"If you're in Heathrow Airport, where you can be guaranteed fast wi-fi, you'll use that - if you're out in the country you may use 3G." Vodafone, which is part of today's embedded 3G plan, was also cautious about writing off wi-fi, pointing out that its business users are already offered the chance to switch between the two systems.

The trouble is that, for most users, dealing with two rival connection methods is a lot of hassle and can prove expensive - especially if you go abroad. We need to know that we can move effortlessly between different wi-fi zones and providers and then onto the 3G network when appropriate. Steve Andrews of BT says providers around the world are working to make that happen: "Our mission is to make it seamless," he says.

At long last, the mobile internet is really beginning to take off, and most users don't really care whether it's 3G or HSPA, wi-fi or WiMax which takes them there. What they're looking for is an experience they don't even have to think about. So who's going to provide that?