What's the best way of using new media tools to cover a news event? An issue close to my heart, as I now travel round with a whole lot of clobber designed to enable instant communication, in text and video. I decided to try out various options at Apple's music event on Tuesday evening - not a major story, so a good venue for a bit of experimentation. 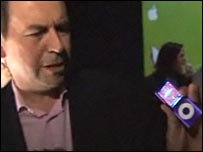 I set off for the Islington Business Design Centre - where the keynote from San Francisco was being relayed to a huge crowd of expectant hacks from across Europe - with a very overpacked kitbag. I took a laptop with a 3g dongle for instant net access, three phones - one with a video camera and the Qik streaming video application enabled - and a Flip video camera, a very cheap and simple device that produces reasonable pictures. Plus an invaluable gadget called Dan Simmons, my multimedia colleague from Click, who brought along his much more professional video camera.

My aim was to Twitter, Qik and Flip my way through the event - and work out which method was best. I had previously asked on Twitter which option people favoured - and, surprise, surprise they favoured a constant stream of Tweets.

So that's what I supplied. From the moment Apple's very Gallic European boss talked of a "great lunch" - it turned out he meant the launch of iPhone 3g - through a rather subdued "Stevenote", to the Jack Johnson performance at the end I attempted to provide some instant headlines. Now I'm not sure if it was "broadcasting" - after all Twitter is a pretty narrow community - but it was an enjoyable way of covering the event, with plenty of interaction coming back to me from other Twitterers.

As I left the hall, I came across other journalists who'd been trying the same trick, and one who'd been following my own Tweets while watching the keynote, which must have been a strange experience. I'd also been reading messages posted by colleagues at the San Francisco event, so what Twitter succeeded in doing was creating a temporary micro-community, which built up a mosaic of news and comment about Apple.

But, along with the micro-blogging, I managed a bit of instant video, using Qik. The quality is pretty poor - it's being streamed over a 3g network which seemed to struggle to get into the hall - but immediacy is the thing here. Apple is very controlling and bans live video relays of these events, so there is a kind of "pirate" appeal to getting the pictures out ahead of time. We now have a new BBC application which takes video straight from a mobile phone and feeds its straight to our broadcast server - but I judged these pictures did not merit that treatment.

Then there was my Flip video, which has the advantage over a mobile phone of shooting an hour of material wthout needing a charge - it uses a couple of AA batteries - and the disadvantage of a lack of instant connectivity. Still, I loaded it straight onto my laptop, cut it together with a simple editing programme and produced this behind-the-scenes video.

But of course it was Dan Simmons with his small, but semi-professional, video camera who made the most important contribution - after all his pictures were of far greater quality than mine, and reached a far bigger audience.

So what's the conclusion about the modern reporter's toolkit? Well, a laptop with a wi-fi or 3g connection seems pretty essential, whether to send reams of text or the odd 140 character Tweet. A mobile phone with an instant video application can get you out of a hole when there's no alternative. But I'd be reluctant to go anywhere without the services of a professional, wielding a decent video camera. As I think you'll agree if you look at my pictures.