Google founder Larry Page wants the world to know that he and the company are serious about open source, unlike others who shall remain nameless. Alas for this reporter all I got for my attempts to dare the man to out any of these companies was a stare and a hint of a "Yeah right!" But if you don't ask... 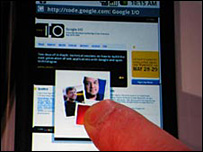 The issue came up at a "round table" meeting he, CEO Eric Schmidt and fellow co-founder Sergey Brin held with reporters at the firm's Mountain View offices.

"They are not serious about it from our perspective," said Mr Page about other companies who declare the code behind their products as truly open source but limit access via a "variety of licensing terms".

"We are actually serious about it," stressed Mr Page.

"We like Linux. We use Linux to build our products and [it] has been a great high for us that they can be adapted and used."

The reason the issue came up was because of chatter about Google's new Android phone which gets released in New York on Tuesday.

The phone, which is rumoured to have a touch screen and a trackball, has been created using code which is open source.

Google is throwing a lot of support behind third party developers who want to create applications for the phone and is sponsoring a developer challenge with a total of $10m (£5.5m) in prizes for the best apps.

The hot favourites are said to include cab4me which lets users order taxis with a single click on their phones and Ecorio which automatically tracks a user's carbon footprint. Both have just scooped $275,000 (£153,000) in the second heat of the contest.

The founders have said the way they have approached the Android project is proof positive of their open source credentials. And Sergey Brin said that commitment has resulted in others following in their footsteps.

"Another effect of Android is with the Nokia announcement with Symbian. They're going to 'open source' that. That's already progress from our point of view."

(I am sure there are some who would like the company to be as open when it comes to the issue of privacy, for which they have long been lambasted.)

But Mr Brin believes this is a train that will have more companies climbing on board. "I expect there will be others taking that code and producing phones without us."

"With Android and Chrome we really are trying to do things differently that will be good for the world and good for technology in general and get a lot more innovation."

While there will be a fair bit of attention on the Android phone this week, those with eagle eyes at the round table got the chance to have a very quick peek when Larry flashed his phone briefly.