Freeserve and ten years of boom and bust

In Bradford today the National Media Museum is holding a little party to celebrate the tenth birthday of an Internet Service Provider. Why is that interesting? Well this particular ISP can lay claim to have brought the web to the mass market in Britain. What's more, in its rapid rise to fame and then back to obscurity, you can read much of the history of boom, bust and technological change in Britain. 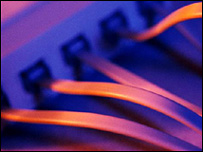 It was on 22 September 1998 that the high street electrical chain Dixons announced that it was launching a free internet provider called Freeserve. The existing players - Virgin, AOL, Compuserve and so on - scoffed at the idea that you could run an ISP without a subscription fee. But the people behind Freeserve reckoned they could build a profitable business if they could grab a share of the telephone charges.

Success has many fathers - but three people have substantial claims to have come up with the idea. Ajaz Ahmed, a PC World store manager in Leeds who lobbied his Dixons bosses for years to start an ISP, John Pluthero, a bright young Dixons executive who was put in charge of the project, and the Yorkshire-based entrepreneur Peter Wilkinson, whose Planet Online business was a partner in the project, and who scribbled on a paper napkin the sums which showed that Freeserve could make money from those dial-up charges.

Within six months, Freeserve had a million subscribers, and the other ISPs were scrambling to replicate its model. By the summer of 1999 it had become Britain's first dot com to float on the stock market. In the spring of 2000 it had two million subscribers - compared to BT's 400,000 - and it entered the FTSE 100. At that stage Freeserve was still making big losses but its value climbed to an extraordinary £9bn - more than its parent company Dixons. More even than the Bank of Scotland, which in the year before it joined Halifax to form HBOS, made a profit of more than a billion pounds.

The world appeared to have gone mad but Freeserve's executives and its stock market followers insisted that "a new paradigm" had been created, where "eyeballs" on your home page were a more important measure of success than profits in the bank. "Beg, steal or borrow - but get your hands on some of those dot com shares" seemed to be the message from the stock market analysts.

The year 2000 also brought even more frenzied competition between ISPs offering customers even more for even less. In March that year I took a call from a PR man explaining that Alta Vista was about to unveil a deal which promised unmetered internet access for an annual charge of just £20. I was sceptical but we covered the story on the BBC and it ended up on the front of the Sun, under the headline "Free Internet".

It never happened. Alta Vista's service - immediately copied by others including Freeserve - was never launched. The whole dot com bubble began to deflate. By December, Freeserve's shares which had reached £10, had fallen below the £1.50 issue price. Then Dixons sold the business to France Telecom for £1.25bn. In retrospect that looks a fantastic deal - because in 2008 what is left of Freeserve? The brand has now disappeared under the Orange banner, which, I notice, is plugging "free broadband" on its site.

And what of Freeserve's founders? Ajaz Ahmed still lives in Huddersfield where he grew up, and has started a number of internet businesses, including Browzar, which claims to allow users to surf the web without leaving traces of their activities. It's he who's organised today's party in Bradford. John Pluthero runs Cable and Wireless in the UK, where he has built a reputation as a frank-speaking boss who doesn't suffer fools gladly as he tries to invigorate a lumbering telecoms giant. And the equally blunt Peter Wilkinson - one of the very few to make serious money out of the dot com bubble - is still running technology businesses from his Yorkshire base.

What is amazing, looking back ten years, is how much has changed - and how little. Back in 1998, one million UK households had internet access, for which they paid around £10 a month for a 56k dial-up connection. Those households spent around £10m a year on online shopping. Now around 17 million homes have a broadband connection, often paying not much more than £10 for up to 8Mbps, and it's forecast that internet retailing will take revenues of £60bn this year.

But in the space of ten years we have also been through two bouts of speculative madness - the dot com boom followed by the credit and housing bubble. Each time, clever people in businesses and investment banks have told us that they have invented brilliant new products that can defy the old rules of financial gravity, from "free" internet providers to complex ways of repackaging mortgage debt. So next time someone comes along promising you a free lunch, remember that someone is going to end up paying the bill. And it could just be you.