US media's crimes against Web 2.0

I've been on holiday - and mostly offline - in the United States for the last couple of weeks, but one story has caught my eye. 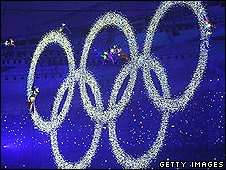 Two American "old media" organisations - a TV network and a newspaper - have had ridicule poured upon their heads for crimes against the Web 2.0 orthodoxy. But both companies may feel they are doing what is right for their 2008 audiences - and for their bottom line.

First in the dock is NBC which chose to broadcast the Olympics opening ceremony 12 hours after it happened in Beijing, in American prime-time. To a British viewer it was a bizarre move - while the rest of the world watched the ceremony live Americans had to wait - and even in the US, NBC came in for some heavy flak.

The New York Times described what it called a game of "whack-at-mole" as footage of the ceremony kept popping up all over the web, while NBC tried to protect its exclusive rights by suppressing it in a seemingly doomed attempt to prevent American citizens from getting an early peak.

The other media business under fire was the Philadelphia Inquirer newspaper whose managing editor sent a memo to staff suggesting that much of the paper's best content - investigative scoops, reviews, features - should appear in print before it went online. You'd think from the reaction of the digerati that the Inquirer was planning to take down the internet and burn bloggers at the stake.

The US new media pundit and professor Jeff Jarvis described the move this way: "You are killing the paper. You might as well just burn the place down. You're setting a match to it...It is suicide. It is murder. You should be ashamed of yourselves." So, um, he thinks they might have got it wrong?

Of the two cases before the Web 2.0 court, NBC's is the easier. Its decision to show the Beijing opening in prime-time rather than live over American breakfast tables has left it rolling in Olympic gold. 34 million people tuned in to watch the ceremony - and the endless "messages" from big advertisers that proved an irritating distraction for this British viewer but hugely lucrative for NBC.

All the leaks on the web and the chatter in the blogs about the spectacular show may even have helped boost the audience, the biggest in the US for any Olympics not held in their territory.

For all the talk of the web taking the power from the schedulers and giving it back to the audience, it's still quite a struggle for anyone but the determined few to get what they want from the Olympics online.

Desperate to see Nicole Cooke's gold medal sprint in the cycling, I had to resort to YouTube - the footage was "not available in this territory" when I tried to watch it on the BBC website from New York. So, in 2008 at least, the broadcasters and the IOC are managing to hold back the web tide, to the benefit of the bottom line, if not the audience.

And what of the thought-crimes at the Philadelphia Inquirer? The paper may be in decline, but it may also feel that, right now, it still has to give its remaining old economy readers a reward for the 75 cents they shell out most days. Jeff Jarvis and many who've responded to his blog suggest there is now a perfect opportunity for a new Philadelphia online news operation to come and steal the Inquirer's lunch. But maybe breaking news - which will still go online first on the paper's philly.com - is not the future for newspapers anyway?

Perhaps in-depth investigations, crafted features, and trenchant, well-informed columnists will provide a more compelling reason to keep buying a paper. And will the Inquirer's online customers really be so aggrieved to get that content at the same time, or even a few hours after the sad old saps who like to turn a page rather than click on a link?

As the new media future arrives, old media organisations on both sides of the Atlantic are experimenting furiously with platforms they may struggle to understand. Newspaper reporters are trying to become broadcasters, TV news correspondents are doing a little light blogging, and broadcasters are making more of their content available online - NBC has had more than a million viewers for streamed footage of one swimming event.

But the habits of media audiences are changing more slowly than some pundits predicted - and getting too far ahead of them is as dangerous as being left behind. By 2012 the revolution may have happened, but for now the likes of NBC and the Philadelphia Inquirer are betting that they can still profit from the old model.