The lion that never roared

To say the Yahoo shareholders annual meeting was the biggest yawn ever might be construed as mean. But then you have to remember the press, and I include myself, were expecting a hum dinger of a showdown with fisticuffs at dawn. 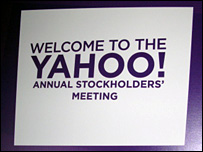 Until over a week before d-day, the annual shindig was one of the most eagerly awaited events in the journalistic calendar. For months there have been calls for the Yahoo board to walk the plank over what some saw as their botched handling of negotiations with Microsoft who wanted to buy the company for $47.5bn.

The on off on again off again (at time of writing) talks with Microsoft have for months enthralled Silicon Valley. As both sides lambasted one another, the admiration pendulum swung back and forward between Microsoft CEO Steve Ballmer and 'Mr Nice Guy' Jerry Yang, who co-founded Yahoo back in 1995.

The jury is still out as to who to admire most. Mr Ballmer for his bluff and bluster and telling Yahoo to go jump in the lake and that he was no longer interested in the company? Or Mr Yang for his publicly quiet nice guy image who managed to escape Microsoft clutches.

And when it all went belly up, Carl Icahn injected some more drama by entering the fray. He tore a strip off Yahoo for letting Microsoft walk away from the table and subsequently bought millions of Yahoo shares. He then declared war on the Yahoo board and said he would launch a proxy fight to oust them and replace them with his own handpicked team. 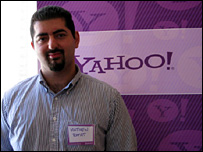 So you can't blame a gal for thinking, well this is one annual shareholders meeting that will go down in history. In the end, it was all a bit of a damp squib.

Carl Icahn didn't show up, but that's because he and the Yahoo board did a deal that resulted in him and two of his team getting seats on the board. The day before the gathering, he wrote in his blog that he wouldn't be coming because he said "It will not do shareholders or Yahoo any good to have the annual meeting turn into a media event for no purpose."

Mmmmm? Do you suppose that would have been his view had an agreement not been hatched?

At the end of the day, around 150 people made the 800 seater Imperial ballroom at the Fairmont Hotel in San Jose look very empty indeed. That meant a lot of leftover croissants and melon and Yahoo staff in purple t-shirts with not a lot to do.

It felt a bit like turning up to a party only to find the venue had been changed without you being told. 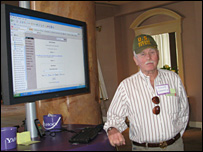 The only person to address the Microsoft issue directly was chairman Roy Bostock who struck me as being in a fairly rambunctious mood as he tried to right the 'misunderstandings' and the 'misrepresentations' about the whole shebang. He told the shareholders that the board had worked its cotton socks off and that "to this day, I can't tell you why they did that (walk away.)"

It was pretty noticeable that neither Jerry Yang or President Sue Decker talked about Microsoft, or Carl Icahn for that matter.

The best lines of the day came from the shareholders.

Matthew Rafat told Roy and the board to stop acting like a 'jilted girlfriend' over the Microsoft affair. Dick Lammerding described Microsoft as "an over-the-hill corporation destroying green octopus". And Dirk Neyhart reserved his invective for Mr Icahn saying he is the kind of fellow "who drives a stake into the soul of a company".

The award for making everyone sit up goes to Mr Neyhart who used the word "pusillanimous."

It means lacking courage and resolution.

Ah you might be wondering, to whom was he referring? Well actually, it was Mr Icahn not the Yahoo board, who got voted back into their jobs for another year.