From the outside, Electronic Arts' Los Angeles studio, just a few miles from LA's main airport, could be the offices of any number of blue chip IT firms.

Just one of the 16 developer studios it operates around the world, the building's anonymous grey and steel exterior speaks of hi-tech and analytical operations, not creativity and video games.

We were given a tour of the studio by David Silverman, the exuberant marketing head of Command and Conquer: Red Alert 3. And it's inside where the creativity and talent is to be found. 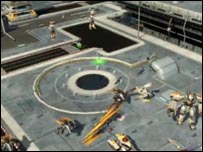 Electronic Arts is an undoubted behemoth in the games industry. It employs more than 8,500 people worldwide, and last year its revenues were more than $3.5 billion.

The firm makes games for more platforms than any other company, and has more than a quarter of a century of experience in the industry.

The company also owns some of the biggest franchises in gaming, including The Sims, Harry Potter, Madden and Fifa.

That success brings its own share of issues: the company in the past has been accused of churning out titles with a lack of innovation. The annual release schedule for the biggest franchises, with tweaks to graphics and gameplay, has seen plenty of critcism aimed EA's way. 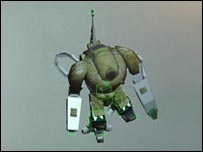 It is a publishing house, and developer with 16 different studios, including relatively recent acquisitions Bioware, the team behind Mass Effect, Criterion, the makers of Burnout, and Digital Illusion, creators of Battlefield.

In the past the firm was accused of meddling too much with the independent creativity of its studios but that would appear to have changed - with studios getting the freedom they need to make the games they believe they can.

Those recent purchases, as well as working with gaming legends such as Will Wright on Spore, and film legend Steven Spielberg on Boom Blox, are revitalising EA from within.

The company is working hard to shift itself from being seen purely as a game firm to a global entertainment corporation. And I spoke with the firm's chief executive John Riccitello at E3 this year about his ambitions for the firm and the industry in general. 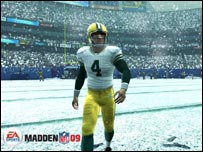 At EA LA the firm has established a music publishing business, partly because songs which appear on the soundtrack to games like Madden have become an essential part of the package.

The company recruited music industry veteran Steve Schnur as its worldwide executive of music and marketing; a quick tour of his territory at the studio and you would be forgiven for thinking you were walking around a record label such as EMI rather than a games firm.

At E3 this year, while most people were grumbling about the lack of spark at the conference, EA's press conference at the downtown Orpheum Theater was one of the undoubted high points.

Instead of a long-winded corporate speech from a suited executive the firm put the lead designers and developers themselves front and centre. 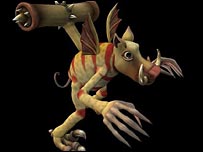 And games such as Mirror's Edge, Spore, Dead Space, Left4Dead and Rage, which EA is either developing or publishing, has given the company one of the strongest rosters of titles for the year ahead.

But the firm still has sizeable challenges to face. Its shares took a hit at the end of last month when its first quarter results were worse than the market expected.

It lost $95m on net revenues of more than $800m in the first quarter. However, EA's sales were up more than 100% on a year ago, thanks to the success of games such as Rock Band and the launch of Battlefield: Bad Company and Mass Effect.

And the firm is still involved in the protracted pursuit of Take2 games, publishers of Grand Theft Auto.

But perhaps the biggest challenge comes from newly-merged Activision Blizzard. The company's most recent financials, with sales of more than $1bn, would appear to suggest the EA is no longer the biggest games publisher in the world.