Can Brits make bucks from blogging?

The answer is no, according to the co-founder of one of Britain's biggest commercial blog networks Shiny Media. In a fascinating guest post on TechCrunch UK, Ashley Norris, who has just left the business he started in 2003, explains why it is so much harder to make a living from blogging in the UK than in the US.

He points out that in the US the likes of Gawker Media and the Huffington Post are showing that it's possible to make big bucks from blogging, then complains that he's struggled to turn Shiny - which has a stable of technology and fashion blogs - into a moneyspinner.

Amongst the main reasons he cites are the smaller UK market, a lack of imagination from the ad industry and the venture capital firms - and an omnipotent BBC.

I'm not best-placed to judge whether the corporation's excellent web operations are really crowding out investment in UK blogs - I'll leave that to you - but let's try to address two other questions. First, is it true that British bloggers aren't finding a route to commercial success, and, if that is so, what is holding them back?

When I posed the first question on Twitter, I quickly received a flurry of messages - some from bloggers - naming successful British blogs. People mentioned the political bloggers, Iain Dale and Guido Fawkes, technology blogs like smstextnews and TechCrunch UK, and a number of conultancies that earn money by advisiing big corporations on blogging. Hmmm, the trouble is those individual blogs do not seem to be building growing businesses - even if they're providing a new living for people who are often already professional journalists or commentators.

Ironically, it's Shiny Media which stands out as one of the few successes, and Ashley Norris appears to have upset some of his former colleagues by his musings. The current managing director Chris Price told me,"We're turning a small profit," though he admitted it was not on the scale of US blog networks.

And perhaps comparing Shiny with businesses like Gawker Media and Huffington Post tells us something about different ambitions on either side of the Atlantic. Patrick Altoft certainly thinks so. He gave up his job at an insurance firm when his blogs about the mobile phone world started making serious money, and he now runs a blogging consultancy. He thinks too many UK blogs are too focused on the UK with too much on their local market: "That's what the UK bloggers are missing - you've got to make it relevant around the world." 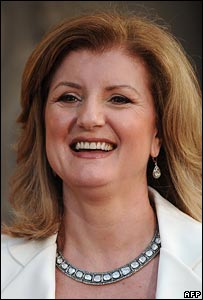 US blog networks also seem more ruthless about their cost-base. Shiny Media has some rather shiny offices in Covent Garden where its bloggers can chew over ideas, Gawker Media lets its people do it from home - and only pays them according to the traffic they generate. And when Arianna Huffington visited the BBC recently, she seemed taken aback when I asked her what she paid her bloggers, indicating that the joy of blogging was sufficient reward.

But Mr Altoft says it is their use of social media like Digg and StumbleUpon to promote every post that gives the American blogs an edge, particularly those focusing on technology. "If you're on the front page of Digg, that guarantees 50,000 hits. The likes of TechCrunch and Gizmodo are there every day - you'll never see Shiny there." He says the American blogs are much more "professional" about manipulating sites like Digg so that their stories get plenty of votes.

But Mike Butcher of TechCrunch UK - another professional journalist making a decent living from blogging - thinks a lack of imagination in the UK advertising industry is part of the problem. "They're a bit lazy. it's easier to buy space on 50,000 Guardian online pages than to deal with hundreds of little blogs."

But Patrick Altoft's best point comes back to what is at the heart of good and successful blogging. "You have to develop your own niche, you need to break news, you need to write stuff that nobody else is writing." He's right. There is a huge amount of information out there - and little time to absorb it - so once readers judge that you are the destination for orginal stories and well-written analysis they will keep coming back, and advertising revenue will follow.

So, yes, just as it is still harder to find funding for a start-up in Shoreditch than in Silicon Valley, UK bloggers are not in the same commercial league as their American counterparts. But if they - and their potential backers - can begin to think big, then a country which punches above its weight in many areas of the media should be able to make a decent fist of commercial blogging.

Just to be clear, Chris Price, described here as the "current managing director" of Shiny Media is actually a co-founder of the business with Ashley Norris, and has been the MD since the launch. Sorry for any confusion.