I can't be the only one who's been thinking rather nervously about exactly what they've been looking at on YouTube over the years now that Viacom's lawyers are about to get their hands on our viewing habits. 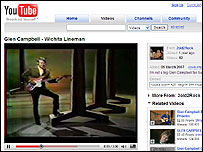 Luckily, I don't think there's much that is too embarrassing in my case, apart from a run of dodgy videos of even dodgier 1970s bands.

But for everyone who leaves a data trail across the internet this is a wake-up call. When you do just about anything online - from a Google search to a Facebook message to a spot of file-sharing - you are leaving traces of yourself that you might prefer to stay private.

For all the talk of a surveillance society, the analogue world can still be a more private place - if I choose to watch conventional television, stick a friend's copied CD in the player, or post a letter, nobody is likely to know.

Of course, there's no real need to worry about your digital footprint. The big corporations that hold our data on their servers have promised us all that it is safe in their hands. Not a chance that Tesco will hand over your Clubcard data to outsiders for marketing purposes, or that your ISP will let anyone else know that you've been uploading your music collection onto Limewire. No way will Ebay reveal that you spend most of your time at work just checking out whether you're still the highest bidder for that (fake) Rolex.

But the YouTube case seems to show that, despite those promises, we have no real control over our data once it is lodged on a corporate server. Every detail of my viewing activities over the years - the times I've watched videos in the office, the clips of colleagues making idiots of themselves, the unauthorised clip of goals from a Premier League game - is contained in those YouTube logs.

All to be handed over to Viacom's lawyers on a few "over-the-shelf four-terabyte hard drives", according to the New York judge who made the ruling. I may protest that I am a British citizen and that the judge has no business giving some foreign company a window on my world. No use - my data is in California, and it belongs to Google, not me.

The other troubling aspect about this case was that it was only the blogs that seemed to understand the significance of the ruling when it emerged on Wednesday night. Much of the mainstream media ignored it at first, seeming to regard it as a victory for Google, because the judge said the search firm didn't have to reveal its source code.

Great news for Google - but the other part of the ruling was deeply worrying for its users, as the technology bloggers were quick to spot. Indeed Google's statement began by welcoming its victory on the code issue, before moving on to the little problem of the YouTube logs.

Now I've never worried too much about the threat to my privacy. I'm relaxed about appearing on CCTV, happy enough for my data to be used for marketing purposes, as long as I've ticked a box, and have never really cared that Google knows about every search I've done for the last 18 months. But suddenly I'm feeling a little less confident. How about you?