You gotta hand it to those bods over at TiVo land. First of all they invent a brilliant dvr for recording TV programmes that lets you skip adverts and gives you ultimate viewing power. Well now, they have turned that on its head and have incorporated a feature that lets you buy products you either see on a show or on a commercial all from your couch.

TiVo have partnered up with Amazon for this amazing switcheroo. And of course it gladdens the hearts of all those companies who had been paying out top dollar for TV advertising only to have viewers completely ignore their pitches. 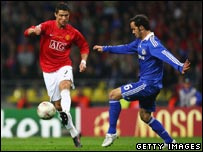 (Full disclosure here. I was an early adoptor and evangelist of TiVo when it first came out but on my return to the Valley, have had to swap to another provider to get the British footy.)

Now the 'Product Purchase Feature' will pair up any item that is available from Amazon with a TV show and allow TiVo viewers to simply click and buy.

"By teaming with Amazon.com, TiVo enables viewers to purchase products related to their favourite TV shows or what they've seen in TV ads without leaving their couch," said Evan Young the director of broadband services for TiVo.

"For example, if a guest on the Daily Show or Oprah has a new book, CD, or DVD out, you can purchase it on Amazon.com using your TiVo remote without missing a second of TV, whether the viewer is watching live or recorded."

Whoopee! More people getting into debt buying things they don't need and more profits for everyone else.

Frankly I think it's a sell out. I liked the fact that TiVo kinda thumbed its nose at the advertisers and gave us, the viewer, the power to just enjoy a programme without it being interrupted every 12 minutes or so.

Now it's the worst of all worlds.

Advertisers hounding us every which way and the awful prospect of constantly being pitched at during a show and after. I know we already are with product placement and subliminal advertising and that as we walk around our towns and cities we are bombarded by thousands of advertising messages every day. But this is just another slide on the slippery slope to increased debt and probably crass TV.

Ask yourself what is going to happen to all those great documentaries and period dramas that cost a fortune to make. Does it mean they will only get funding if they incorporate this feature?

Let's be really extreme and imagine as we watch Mary Queen of Scots head to the chopping block, that we are offered the chance to buy DVDs on the history of the British monarchy. Or let's say, during that World Cup clincher between England and Scotland (hey we can all dream!) that you get the amazing opportunity to buy the autobiography of Sir Alex Ferguson or David Beckham's new underpants line.

Yes, you may scoff, but who is to say that that is not what lies down the road.

Don't get me wrong. I understand the basic business model that TV needs to make money to make programmes and that advertisers need eyeballs to sell their products and that the advertising pie is being gobbled up by the internet. What I fear is that erosion of great TV and the ability of great TV producers and directors to take creative chances that might not always pay off.

Heck you can see here in America that advertising is already going where it really shouldn't ought to.

On the front page of this week's New York Times there is a story about how the presenters on a morning news programme in Las Vegas sit with cups of McDonalds iced coffee on their desks. The anchors rarely touch the cups. I think that is meant to convey journalistic integrity or something.

Execs at the station say it's part of a six-month promotion to shore up advertising revenue. One advertising honcho at the company behind the scheme admitted to the NY Times that if the programme did a negative news story about McDonalds that the cups should get whisked away or they wouldn't be very happy and would probably can the promotion.

I lament the all pervasive nature of advertising in our world and especially in our very own living room. And now TiVo, the company that made skipping adverts so easy is delivering viewers back into the hands of advertisers. But then I guess that's what they call progress!