We're trying to ignore the hullabaloo over the 3G iPhone (is a 3G phone really that new?) but the launch of Apple's applications store is of far more interest. Firstly because it's the first real mass-market attempt to sell mobile users on the idea of downloaded software, and secondly because of the way the whole system has been locked down by Apple, to the dismay of some smaller developers. That's a real contrast with the way some of Apple's rivals in the mobile software world are operating. 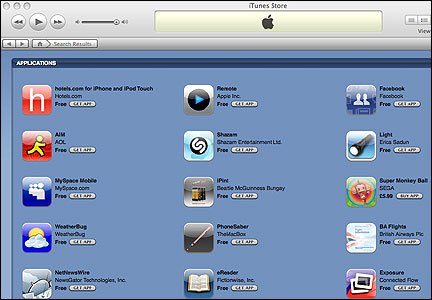 By lunchtime on Thursday the iPhone apps store was up and running - though rather hard to find on iTunes.

I browsed through hundreds of free apps, from iPint, which makes your iPhone look like a pint of lager, to social networks like Facebook and MySpace, to a British Airways application which gives you a live departures board - but may not tell you where your lost luggage has gone. There is an Apple application which turns your iPhone or iPod into a remote which can control your iTunes from anywhere over your wi-fi network - and another developer will turn your phone into a light sabre.

The paid-for applications seemed thinner on the ground - they included maps of New York, photo sharing services, and a number of games. The most expensive appeared to be Netterman's Anatomy Flash Cards for £23.99, so if your doctor gets out his iPhone during a consultation you'll know what's happening.

"A bunch of stuff that I never needed before, and probably don't need now," was the cynical response from one colleague when I read out this list. He may be right about the paid-for applications - but I think the free stuff will fly off the virtual shelf. For many people it will be the first time they've been introduced to the idea that you can customise your phone with new software.

Of course you can already do that on plenty of other phones - I've put several free mobile video applications on a Nokia phone - but I'd guess the vast majority of users have never caught on to that.

So this is a game-changer - but Apple has written some very rigid rules. It controls access to the Apps Store and to the iPhone. "It's very locked-down" one small developer told me, contrasting Apple's approach to Google's upcoming Android platform and even to Windows Mobile.

Joe Richards has been trying to get his security application iRedhanded (it sends out annoying noises to anyone who steals your phone and wipes personal data) onto the applications store. He says big firms have been welcomed in - but for smaller players like him "it's like waiting outside a nightclub with the bouncer promising you'll be let in sooner or later."

He believes that the army of small and innovative developers who could make the real difference are being alienated: "There's a serious danger that they hack off the smaller developers and they go off to Android." Android is not the only threat. Symbian, now wholly owned by Nokia and going open-source, is by far the biggest player in this industry.

There is definitely a benefit to Apple's approach. After all, a bit of quality control will be welcomed by consumers - remember all those useless and annoying Facebook applications which appeared after it threw open its doors to any developer big or small?

But if Symbian, Google Android and Windows Mobile have any sense they will be opening their own applications supermarkets - and finding out whose approach, open or closed, proves most attractive to mobile users.

UPDATE:
Okay, to those who think I've committed some terrible faux-pas by even daring to write about the iPhone apps store without spending a couple of weeks with a cold flannel on my head, let me make a few things clear:

The 3g iPhone will be a big successes - the queues at my local shopping centre at an O2 and two Carphone Warehouse stores at 0900 tell me that, though there was much grumbling in the line when the message arrived "the computers are down".

The App store is already doing a lot of business and has some really good stuff - as I said above it is a "game-changer". But don't think the likes of Symbian, Windows Mobile and Google are going to let the market be taken away from them without a fight

And, finally, if a BBC blog waited for a few weeks to reflect a story that much of the tech world is talking about, would that be a sensible strategy?