As soon as Google launched Street View, its innovative photo-mapping tool, people began complaining that their privacy had been compromised.

From the man walking out of a sex shop, to the sun-bathing girls - had Google compromised their privacy by taking photographs of streets that also captured people going about their daily lives? 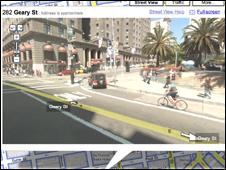 The tool launches in the UK soon and the cars which drive up and down streets taking snaps have been spotted on the streets of London.

But will Street View in the UK fall foul of data protection laws? Simon Davies, of Privacy International, believes that Google needs to get permission from people who are snapped on Street View, because the tool is being used for commercial ends.

You can read more here.

Google has taken at least one step to address concerns; placing a link to its privacy policy on its homepage. Is this enough of a step?

Simon Davies has written to Google outlining his concerns. It makes for interesting reading.

So take a look for yourself. Here it is:

Recent media reports in Europe have mentioned that Google has begun deployment of its StreetView system in the UK and elsewhere in the EU. You may be aware that Privacy International has stated, both privately to Google legal staff and to the media, that we are concerned about a number of potential violations of national law that this technology may create.

In response, Google has informed the media that it will institute "face blurring" technology to ensure legal compliance. However, when we requested information from Google six weeks ago about the specifications for this technology your colleagues admitted that there were problems with it at an engineering level.

We are concerned that claims of protection are being made that may not be possible to institute. I am writing to request full disclosure of the technology specifications for the promised face and number plate blurring system so that the public can be assured that Google has taken every step necessary to satisfy not just legal requirements, but that it is also fulfilling its stated commitments.

We have in the past raised concerns directly with Google that such claims have historically failed to materialise. I recall the promise made by Google to the FTC during the Doubleclick acquisition that "crumbling cookies" would be developed. We have seen no evidence that this technology has been deployed. In response to concerns expressed at the time of our 2007 Internet privacy rankings, Google also promised a "privacy dashboard" to help consumers understand the functionality of their user settings. This technology has not appeared.

You will know that we have often complained that Google performs poorly on the issue of transparency. I believe this is one occasion where disclosure is crucial. Public trust in Google will suffer if there is a perception that the company is manipulating the facts.

I ask that you respond with this technical information within seven days. I also ask that you inform us of the steps, if any, that you have taken to consult the public over the use of their images for what is, in effect, a commercial purpose.

If we do not receive a satisfactory answer within that period we will have no choice but to lodge a complaint with the UK Information Commissioner with a request that StreetView deployment be suspended pending a formal investigation.