E3 gets set for gaming

Hands up if you've got an Xbox 360, PlayStation 3 or Nintendo Wii? 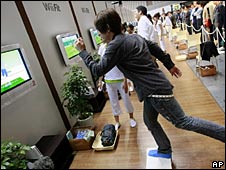 That's a fair few of you.

Now, hands up if you play any games on Facebook, or casual games on your PC, perhaps online gambling, or perhaps a few games on your phone, or on your DS Lite or PSP?

I suspect that there might be a few more of you in that category.

Yet the console manufacturers have not always been successful in tapping this rich interest in gaming.

The Wii has made great strides with family-friendly, social gaming but Sony and Microsoft have traditionally aimed for the hard core gamer.

That could all be about to change at this year's E3. Microsoft, in particular, is expected to spend vast amounts of money rebranding and repositioning the Xbox 360.

As one commentator said to me: "Microsoft want to be seen more like Disney and less like Tarantino."

The Xbox has for too long been seen as the home of Halo, of first person shooters, twitch action gaming, and online death match battles.

Microsoft knows that if it is going to appeal to a broader market, and to gamers in territories like mainland Europe, it needs a softer, more accessible image.

That doesn't mean the hard core gamer will be left out in the cold - Gears of War 2 and the power of Xbox Live are the two biggest weapons in its arsenal.

For PlayStation, Sony needs to move beyond the brand. The firm relied on brand loyalty in the first 12 months of its launch but now it needs to put clear blue water between itself and Xbox.

It has made bigger strides than Microsoft in the social gaming arena - with Buzz, Singstar and Eyetoy - and the firm will be putting more emphasis here too, as well as pushing its exclusive franchises.

Nintendo has the difficult task of pulling the same magic trick twice. It dazzled us with the audacity of the Wii, and has carried off the spoils for the last two years. But is there more depth to the Wii? How long can it rely on puzzle games, or lifestyle games? I hope we find out what Nintendo's peerless in-house studios are up to - because we've heard so little from them.

I'm expecting to see the big firms like EA, Ubisoft and Activision announce titles for the Wii which make great use of its control mechanism, as well as develop the social aspect of gaming further.

We're out at E3 this week, writing for the website and blog, doing on demand video, a bit of radio and some TV. So we've got a big week ahead of us.

So what are the big games of E3? Well, I'll be looking forward to seeing Fallout 3, Left4Dead, Dead Space, Gears of War 2, Fable 2, Killzone 2, LittleBigPlanet, and any first-party Nintendo titles.

And you? What are you hoping to see from E3?