BT has announced a big investment this morning in fibre, promising to get Britain into the broadband fast lane. It's aiming to bring 10 million homes within reach of fibre-based broadband by 2012. That's going to cost a whopping one and a half billion pounds - though some of that cash was already in the investment pipeline. 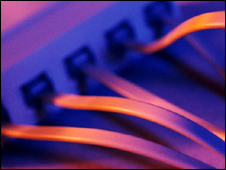 It looks as though this could be the moment broadband enthusiasts have been crying out for, when the UK starts catching up with countries who've already started the move to ultra-fast networks. BT was keen to celebrate. "This marks the beginning of a new chapter in Britain's broadband story," according to the new Chief Executive Ian Livingston.

But hold on a minute. We were told that digging up Britain to lay a fibre-to-the-home network would cost £15bn, ten times what BT is spending, so how can they do it for the money?

Well first of all the plan is to reach 40% of UK homes with fibre, with the rest served by the new ADSL2 network, which is going to offer up to 24Mbps. And then in most cases they're planning not fibre to the home, but "fibre to the cabinet" - in other words that box on the street where you sometimes see an engineer fiddling. That will deliver up to 40Mbps, with BT saying its technicians believe they can eventually get up to 60Mbps.

Some places - like the Ebbsfleet development in Kent - will get fibre right into the home, with the promise of up to 100Mbps soon, and 10 times that in the future. Who gets what will depend on an assessment of demand from both consumers and the retail broadband suppliers who will be using the BT fibre network.

And BT is making it clear that the regulator must play its part by allowing it to make a decent return on the cash. Within hours of the announcement, Ofcom had put out a press release welcoming BT's plans, and talking of providing "the right incentives for operators to invest" in fast broadband, so I think we can assume that the regulatory side will be sorted.

What we don't know yet is what this will cost consumers. But after a bitter price war which has left many broadband providers struggling to provide a decent service at a profit, there looks certain to be more mergers - and with fewer, bigger broadband players, that could mean we all end up paying a bit more to get the kind of speeds BT is now promising.

So this may not be quite the bold step into the future painted by BT - and remember the likes of Virgin Media are already promising ultra-fast broadband - but it is a sign that money is beginning to flow to fibre. And let's not underestimate the risk involved for a major telecoms business in promising extra expenditure in the current environment. Stockmarket analysts did not seem too surprised by the the BT announcement - but the share price was still down more than four percent the last time I looked.