A tale of two Microsofts

And so it was to a rather emasculated Los Angeles Convention Center for the first press conference and briefing of E3 2008.

The E3s of old were colourful, brash affairs but there were no signs of the traditional giant posters on the convention windows and walls. The walls were bare and the hall had the air of an accountancy convention, rather than a games conference.

We'd been dragged from our beds for an early morning exclusive press briefing with Microsoft, ahead of the actual Xbox conference. We were promised a "major announcement".

On the way to the venue the journalists speculated about the announcement:

So what was it? Well, it was Lips, a karaoke game that bears more than a passing resemblance to Singstar on the PlayStation 3.

A ripple of disinterest passed through the assembled media who half-heartedly asked some questions, most of which were batted away with a "we can't talk about that right now" response.

Microsoft brought on Welsh singer Duffy as the acceptable face of video games to plug the new title. Right on cue she admitted she didn't play video games because they were too violent. 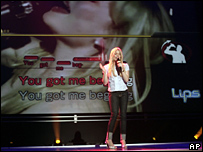 One of the journalists asked her about downloadable content for Lips. Unsurprisingly, she wasn't exactly that well versed with the digital distribution plans for Xbox Live titles.

And so on we trouped to the press briefing proper. And it was the usual slick Microsoft briefing.

We were expecting a radical new direction for the console. But the first half was dominated by the classic blockbuster franchises, Gears of War 2, Fable 2 and Fallout 3.

Just as we thought that Microsoft's attempt to become a more family-friendly console was an illusion, up stepped John Schappert and Shane Kim to reveal all.

A re-designed Xbox Live, coupled with plenty of social and casual games were paraded in front of us. But it felt like Microsoft had merely cherry picked some of the more successful aspects of the PlayStation and Wii, and created versions for the 360.

There was lots of news about new developments for Xbox Live content but most of them applied only to the North American market.

Bungie were due on stage to reveal a taster of their upcoming project their first title post Halo. But there was no sign of them.

I had been due to speak with them immediately after the briefing but that too was pulled with little explanation.

And so what impression am I left with? Well, Microsoft are clearly a company being pulled in two directions: it needs to satisfy the blood-thirsty needs of its core demographic, but can only triumph over Sony if it can attract more European gamers to the platform, and they tend to prefer more casual titles.

Microsoft can do both but the firm just looks uncomfortable trying to do casual and social: a demo session during the briefing of three Xbox senior playing a movie game was just painful to watch.