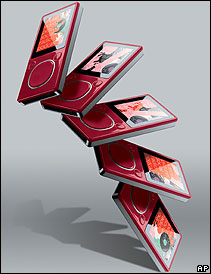 So the Zune will now have a video marketplace in place, so users can download TV shows and watch them back on their player.

The thing is: With Zune availability limited to the US, does any one really care?

Jupiter analyst Michael Gartenberg says: "Microsoft has yet to provide seamless content flow from screen to screen across the range of devices supported by Microsoft technology."

The Zune marketplace does have NBC shows - which were pulled from iTunes after the firm fell out with Apple. But that's hardly a big pull for consumers.

When the Zune was first sold in the US many people expected Microsoft would use the limited launch to learn some lessons before aggressively competing with Apple and the iPod worldwide.

That's yet to happen. Why?

Is Microsoft still learning lessons? Has it all but surrendered global domination to Apple?

Apparently the Zune IS heading for Canada. So is that the first step towards an all-out assault on the iPod?

I'll leave the final word to Michael Gartenberg: "Microsoft still has a long way to go before Zune becomes a credible iPod alternative for mainstream consumers."