For a lot of people living in Silicon Valley, Craig Newmark is the guy who has helped them find an apartment, a job, someone to play tennis with, get rid of stuff, make a connection and even score tickets for the world series. 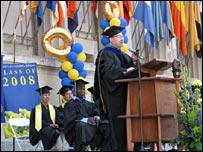 He has even helped me. I got the house I live in at the moment through Craigslist, and the nursery school where my son goes to. When I lived in Silicon Valley during the dot com era I sold my car and other earthly chattels when I upped sticks to return to the UK.

The influence of his online classified site stretches far beyond the Valley.

Craigslist is the seventh most popular website in the States. The site has set up shop in 567 cities and in over 50 countries worldwide. Added to that boast is the fact it gets more than 10 billion page views per month. Pretty darned impressive.

In Silicon Valley, Craigslist is a byword for community, integrity and trust. Craig Newmark is like a celebrity here. And there is a genuine affection for him and for what he tries to do through the site.

"The internet is about inclusion" he explained. "Including everyone and trying to be fair to everyone and that's a little bit of what Craigslist is about."

"The deal is there is nothing really noble or altruistic or pious about what we are about. We are just doing what feels right."

So it was no surprise then that Berkeley University called on his services to speak to the graduating class of 2008 in the hopes they would be inspired by his words and his deeds.

Refusing to be hidebound by convention, Craig eschewed the safety of coming with a written speech and just talked from the cuff. While it might have been a bit rambling in parts, this crowd were willing to indulge him.

But the theme was constant. "Go out and change the world," he implored. A big ask for sure but nonetheless one that was in everybody's grasp to achieve he said.

Under searing heat on the stage of the Greek Theatre, Craig stressed that it was the boring stuff that was important and that this was the road to success for such a lauded goal.

"This is a big year in human history. We have an historic election this year coming up. If you want to do something big and boring then vote."

And given this is Silicon Valley, he urged graduates to use the internet to become more politically active. Social networking sites like Facebook and MySpace can help people connect for good causes like the elections coming up, he said.

"Most of you are too young to remember when we in this country had the rule of law and a Constitution, but at Craigslist we act as if the Consitution and the Bill of Rights are still in effect because we're pretty confident that on Jan 20th we're going to see that stuff again."

Dressed all in black in his hat and gown, Craig told me backstage that he was impressed by how the Democratic race was energising young people and that by encouraging everyone to vote, "they really do have the chance to change the world."

Craig has made no secret of the fact he is backing Barack Obama and even writes for his blog but during this convocation he didn't wave the flag for any particular candidate just for democracy as a whole.

But it wasn't all politics. After all part of his duty was to impart some words of wisdom and advice to arm these youngsters as they make their way into the world.

"Give the other person a break now and then."

"Guys you are not as funny as you think you are."

"Articulate what your company or non profit is about in 45 seconds."

"Focus on the things that can be done."

Okay so it might all sound homespun and boring, as Craig would say, but he maintains that's exactly why it's important. Its that boring stuff we do that makes us better human beings and that in turn makes us want to better ourselves and the world we live in.

As well as giving the students some 'tools' to survive the grown up world, Craig also recommended a bible of sorts that has kept him on the straight and narrow.

"Read the work of America's most eminent organisational behavourist," he suggested. "Many of you will be working in corporations and cubicles so you need to read everything associated with the name (pause for effect)... Dilbert."

As Dilbert would no doubt say, that's one 'induhvidual' piece of advice Craig.