A revolutionary organisation sets out to change the world and empower millions by overturning the established order - but ends up abandoning its early aims and getting into bed with what used to be viewed by some of its supporters as the Great Satan. That is how some of the pioneers of the One Laptop Per Child project will view the deal that has been announced with Microsoft. 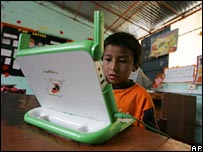 When we spoke on the phone to Nicholas Negroponte, the founding father of OLPC, it was clear he was expecting flak from past and present disciples for deciding that the little green laptop would now run Windows XP as well as Linux.

There has already been an ideological battle raging within the non-profit organisation, with former colleagues of Mr Negroponte decrying his tactics - some publicly in blogs, others more quietly. They have laid bare the schism in this laudable project to bring cheap computing to millions of children across the developing world. It's a battle between hardware and software, and between pragmatists and purists.

The purists seem to believe that open-source software - the Sugar user-interface and the Linux-based operating system - is at the heart of the project and its educational mission. But Nicholas Negroponte, dreamer turned realist, just wants to get as many laptops out as possible and now appears not to mind whether they run Linux or Windows. "OLPC is not in the open-source advocacy business," he told us, "we're in the education business."

While conceding that sales of the XO laptop had not taken off as fast as he had hoped, he denied that was the reason for the Microsoft deal. But it is clear that the very survival of the project was in question as country after country failed to translate warm words about the laptops into firm orders. Mr Negroponte admitted that certain countries had been insistent that they wanted Windows XP as an option before they would consider signing up.

OLPC and Microsoft are suggesting that what we will see is dual-boot machines, where using Windows is only an option, just as it is on Apple computers these days. But who wants to bet that government education departments, already far more familiar with Microsoft's operating system, will now opt for he Linux alternative?

So where does this leave the whole OLPC project? Next week a new version of the XO will be unveiled, and later this year trials will take place in five countries of laptops with Windows XP. But in the meantime, other small, cheap laptops - the Asus Eee, the Intel Classmate - will continue to make inroads in developing countries. Even with the backing of the biggest noise in the software world, the XO laptop may not fulfill the dreams of its creators.

But then again, the OLPC vision was about spreading the idea that cheap computing could play as big a part in education in developing countries as more books or better facilities. And, even if it does not come in the form of the XO laptop, that vision now looks more likely to become a reality.