You arrive up a long drive, past golfers and other country club members. Then, after passing through the portals of this hotel on the outskirts of Watford, you are suddenly in a different world. Eager young people are networking furiously, the chief executives of Europe's leading media companies are having discreet chats in the corner - oooh and there go two of the richest people you're likely to meet, the billionaire founders of the world's most happening technology company.

Welcome to Google Zeitgeist, an in-house corporate conference like no other. After all, which other company could attract a prime minister and a queen (Gordon Brown and Queen Rania of Jordan) as speakers? 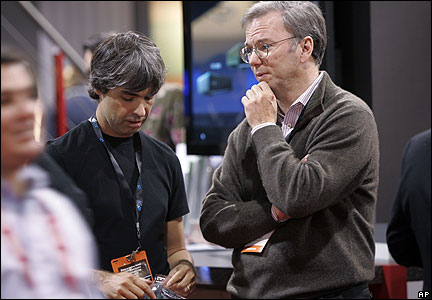 We didn't get the hot news that we were looking for - a speedy response to Microsoft's latest move in the Yahoo saga - but we did get a fascinating glimpse of what makes Google work, and the dynamics of the relationship between three very smart, and very strong-willed people who continue to build an ever more powerful business.

Larry Page and Sergey Brin, in almost identical dark jackets and grey T-shirts, sat side by side, batting most of the questions around - while Eric Schmidt, like a proud uncle with two brilliant nephews, sat at the end of the table, occasionally intervening when he felt Larry or Sergey were being too exuberant in their responses.

So what did we learn? That, like any team whose overwhelming success has begun to antagonise the rest of the world, they present a united front against any criticism. No, Google isn't too powerful in advertising - it's yet to make it big in television or radio or print (but we're coming so watch out was the underlying threat). Oh, and by the way, our success isn't down to the "strong-arm tactics" used by another company which has run into anti-trust problems. Hmmm, wonder who that could be?

What about privacy? Not a real problem for Google - it's those pesky social networking sites that are the real issue, with users putting inappropriate photos online. "These things pop up and haunt you," according to Sergey. Whereas we will only use search data to give you an even better, more personalised web experience. And while some businesses may choose to play fast and loose with your data, that isn't the case with Google: "If we're not trusted, we have no business. We have such a lot to lose."

When it comes to the opposition, these guys claim they actually spend very little time thinking about it. In the words of Eric Schmidt, "Google tries to think about Google most of the time." You might think the two founders, having built huge fortunes and the world's most admired technology business, would find it a little dull to continue thinking about Google, but both seemed fired up by new challenges.

For Larry Page it was renewable energy. He's spotted that the huge server farms Google is building have lower energy bills in those places where the electricity comes from dirty old coal-fired power stations. So his new challenge is to prove that you can make renewable energy cheaper than coal, with investments in solar power.

Sergey Brin, just back from visiting relatives in Russia and apparently proffering some technical support, is frustrated by how complicated computers still are for many users, and fascinated by the way mobile phones are likely to give many in the developing world their first access to the internet. He promises that Android, Google's mobile operating system, will make a big difference in places like Africa.

Both apparently feel the need to show that their huge wealth can be put to good use - as well as buying them their own private Boeing 767. Here's how Sergey Brin summed it up at the end of their press conference: "We have to prove to the world that, as we have been successful and fortunate, we can reinvest to create substantial good."

It was a relaxed and sure-footed performance by the triumvirate that runs Google. Their company is no longer the smart and plucky kid taking on the big boys, but, to some eyes, the new playground bully of the internet. But they have the satisfaction of knowing that while "Google tries to think about Google most of the time", that is just what the opposition are doing too.