Google - about to overtake ITV

Over the last three years I've made frequent visits to Google's London offices opposite Victoria station - and every time I go back the search firm seems to have filled more space.

This week the funky offices and the free canteen were sparsely populated but only because just about the whole London workforce had gone off on the annual Google ski trip. 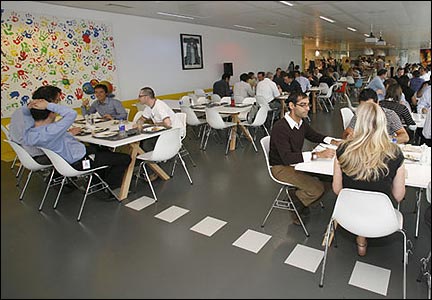 And what are most of the eager young Googlers doing? Selling advertising or talking to Britain's biggest brands about how they can move more of their marketing budget online.

Because it's easy to forget that as well as being an extraordinarily innovative firm, Google is also rapidly becoming Britain's biggest advertising business. The latest figures - released on Thursday evening - show how rapidly it is growing in the UK, earning $803 million (about £407m) in the first three months of 2008, about 40% up on a year ago.

Let's put that into context. Last year, ITV's net advertising revenue was £1.5 billion. So, even if you just multiply Google's earnings by four and assume no further growth this year, Britain's biggest commercial television business - the original "licence to print money" - is about to be overtaken by an American upstart which only arrived in the UK in 2001. 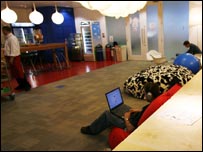 You could not ask for a starker example of the threat to traditional media from the online world.

Marc Mendoza - whose media buying agency is putting a lot of its clients' budgets online - tells me that Google now has about 80% of the UK online advertising market. It turns out he's referring to search, where Google has crushed all opposition, and of course there are other forms of online marketing.

Still, the latest figures I've seen put total UK online ad spending at around £2.8 billion last year, of which Google had nearly half. That's a stunning share, and with the acquisition of DoubleClick now completed, Google looks set to be bigger in display too. The company's founders were also sounding very bullish in their results conference call about their prospects in the mobile advertising market.

So who's got a problem with this? Microsoft, obviously - that's why it is determined to win its battle for Yahoo. With an infinitesimal share of online advertising, it is paranoid that the Google business model has more of a future.

But here in the UK, the internet service providers are desperate to shore up their wafer-thin subscription revenues with some advertising cash. That's why they're looking seriously at Phorm's web tracking software which promises to serve up targeted ads.

At an open meeting this week Phorm's chief executive was hammering home the message that there needed to be an alternative to Google.

All those young Googlers in their multi-coloured Victoria offices signed up to an edgy, radical business which was admired - even loved - by the rest of the industry. Now, though, Google has grown into the biggest kid on the block, and is eating everyone else's lunch. I don't think there's going to be much love flowing its way from now on.